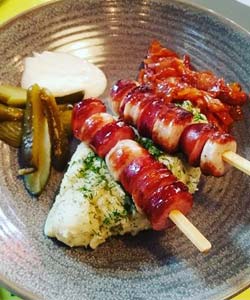 Thanks mostly to a ”humble potato pancake”, three guys recently decided to give up their day jobs and pour their hearts and soul into a new culinary venture. Meet Piotr (Peter), Łukasz (Luke) and Przemek. The guys opened Platzki at the end of last year, joining two other businesses in Spinningfield’s innovative new concept The Kitchens Left Bank. This space allows talented new local newcomers, to showcase their skills and unique dining visions.

Peter ended up in Manchester via Australia and Liverpool, having studied marketing and advertising. Luke and Przemo worked as chefs both in their native Poland and also for many years in some excellent venues in Greater Manchester, so in theory they had the right mix of talents between them to get this off the ground. The backstory includes brain-storming evenings with plenty of beer, experimenting various dishes, with the base ingredient often being the potato pancake (placki) and trying out their dishes and ideas at street food festivals. They saw a gap in the market for Polish eateries in the centre of Manchester and decided to give it a go.

My friend and I decided to pop in one late afternoon last week and see what all the social media buzz was about. We were greeted warmly by Peter and quickly we realised how passionate these boys are about their vision. Platzki first and foremost wants its unique selling point to be its daily soup and main course changing each day without any particular pattern but just based on what they can pick up at market, early every morning. They also have big plans to develop the catering side of things and so far have catered for birthday parties, weddings, funerals and bar mitzvahs.

Today’s soup was Krupnik, which is usually a chunky meat broth based soup with potatoes, pearl barley, mushrooms and other vegetables. This was served with two types of bread (rye bread with seeds, carrots and raisins plus some pumpkin bread). To say this was delicious would be an unfair understatement. My partner is Polish but neither he, nor my in-laws have ever made this soup as wonderful as Przemo (I might get into trouble for this). The use of wild mushrooms was a nice twist as was the generous use of fresh dill. Other soups that feature here regularly are Barszcz (beetroot soup), Żurek (smoked meat, sausage and sourdough) and Rosół (chicken and vegetable noodle soup that can cure and comfort most ailments and ease bad days).

Being ever gluttonous, we decided to try both a main course (to share) and one of the ‘Zaps’. Zaps, or Zapiekanka are a guilty pleasure Polish fast food – the food of students, busy workers and drunkards but nonetheless satisfying. They are effectively toasted baguettes topped with ingredients like mushrooms, sausages and nearly always melted cheese. Luke kindly did us a half and half of the Classic (mushrooms, onions and cheese) and the Mountain Wind (smoked cheese aka ‘Oscypek’, plum marmalade and caramalised onions). There is also an option to try a quarter of all four types for only £6: next time.

Today’s main dish was Szaszłyki z Kiełbasy, basically translated to grilled sausage on a stick! The two types of sausage were grilled perfectly, served with dill mash, caramalised onions, pickles plus homemade honey mustard and some horseradish. We enquired about other main dishes they prepare regularly and are pleased to report they include various filled Pierogi, Gołąbki (meat stuffed cabbage leaves with tomato sauce in the main) and my favourite Polish dish Pyzy, which are huge but light flour dumplings served either stuffed or with some kind of stew/meat gravy but this changes regionally. Main courses usually range from £5-7. Today’s was only £5.50 for a generous plate of homemade food that is so reasonable when you think what people are willing to spend on ‘meal deals’ and horribly processed fast foods.

We washed everything down with some Lech beer (I have loyalties to Poznan) and an interestingly delicious honey beer, Perła. They guys offer a big selection of Polish beer and have recently introduced a few wines into the collection too, including some traditional mead wine, or miód pitny called Staropolski. We weren’t brave enough to attempt a whole bottle on this occasion!

Speaking of tradition, the boys are keen to not only attract local Polish residents but also get the wider community engaged in Polish cuisine. They are proud to prepare traditional fare but are quite comfortable to put modern twists on dishes and add new flavours where it will help improve. They want to show that Polish food is more than the old hearty stereotype of meat, potato and beetroot etc. They’ve certainly made modern twists from the outset by making the name more accessible to us Mancunians (Placki becomes Platzki to ensure it’s not mispronounced) and they kindly have phonetic spellings of dishes on all their social media posts and their menu boards.

The guys also seem firmly committed to using as much local and ethically sourced produce as possible. They are also part of the “To Good to Go” concept, which was originally a Danish app trying to ensure as little food waste as possible. Many City Centre venues now take part and it effectively allows people to buy half-priced food for the last trading hour of the business day to help cut out unnecessary wastage.

Having been charmed by their hospitality and also having seen a few other customers tuck in, we couldn’t leave without trying some cheesecake (sernik). My friend had a chocolate, orange and pistachio one and I went for a cherry ‘winter wonderland’ version served with a lovely zingy compot.

We left smiling, armed with some doughnuts (to give out to friends of course…) wishing the boys at Platzki the best of luck for success. If their passion and talent has anything to do with it, they’ll have a few more venues in the next couple of years but we will definitely be spreading the word to our families and friends, as a little independent might need that in its initial months. Go grab a beer and tuck in to some excellent value, soul-warming food and conversation. Smacznego!! (Look it up).

Always take your @canalstcard too for great savings.