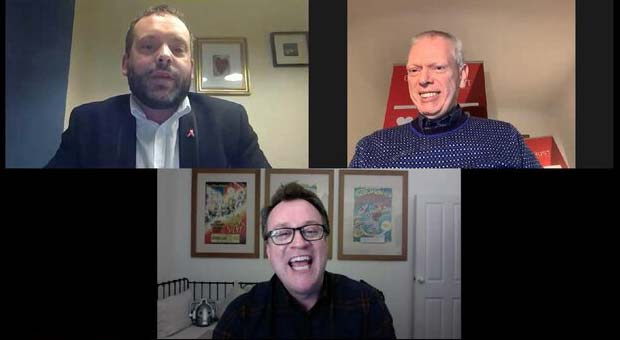 Following the huge success of IT'S A SIN,  writer Russell T Davies joined George House Trust’s Chief Executive Darren Knight  and HIV guru Paul Fairweather for an online discussion around the issues dealt with in the show.

The event provided an opportunity for people to hear about what inspired Russell to create ‘It’s A Sin’, his reasons for supporting George House Trust and for attendees to submit their own questions to Russell.

Much centred on a lunch meeting between Russell and Paul some 4 years ago, when Paul's own experiences from that time in the early 1980's, which in turn inspired Davies to create It's a Sin, which he then merged with his own personal stories and friendships from his time in Swansea.

The evening was hugely insightful and entertaining and allowed viewers to ask questions and comment about all aspects of the discussion.

The show has already positively impacted on the valueable work undertaken at George House Trust and increased donations as a result.

Should you wish to join them then please Donate now via www.ght.org.uk/donate