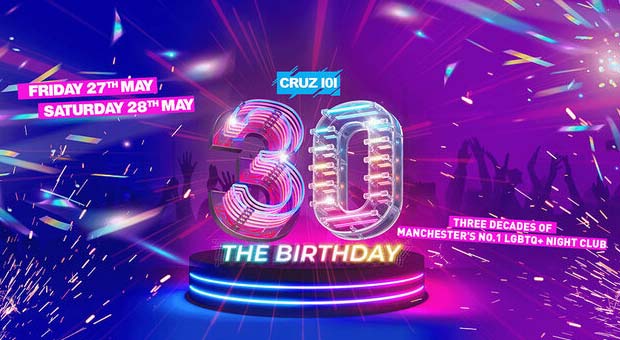 Before it was turned into a night club, Cruz 101 was a shipping warehouse which contributed to Manchester's huge textiles industry and making the area the world's largest marketplace for cotton goods.

After many years as a derelict building, a year-long renovation took place after which point the club was ready to open its doors for the first time on 22 May 1992.

Homophobia was still commonplace at this time and initially licence applications were refused on the grounds that there couldn’t possibly be a need for a place of such a size as there were not that many people who would want to frequent a ‘gay club’. The creators then had to demonstrate there was in-fact a 'NEED' for a space and a petition was quickly arranged which attracted 100k+ signatures.

Following a lengthy legal battle at the high court the authorities eventually deemed this sufficient and after much debate and no small amount of wrangling, finally granted a licence to serve alcohol to the 'members only' nightclub, although membership was compulsory and punters had to wait up to 48 hours for membership to be cleared.

The club became a landmark and was instrumental in changing the area from ‘ghetto’ to Manchester’s Gay Village, kick-starting the unique inclusive space we have today. So iconic was the club that in 1999 the exterior lighting and signage of the club was changed from "Cruz 101" to “Babylon” and the club became the backdrop for scenes of the UK series of Queer As Folk. Following the completion of filming, the original name and signage was returned.

The rest, as they say, is history.

GM, Gerrard Woods, said “30 years of commitment to, and delivering for our community has been a privilege. Things have changed unrecognisably over that time but the unwavering support we have from our community and customers inspires us to continue creating this safe inclusive space, and the best nights out. I’m proud to have been a part of a team of people who care so passionately about what we do.”

Over the years, Cruz has not only demonstrated 'need' but evolved to become one of the UK's most popular, successful nightclubs catering for the LGBTQ+ community and their ally friends.

Celebrations will be held from the 26th – 29th May in style, with massive entertainment over the birthday weekend including SONIA, the ‘Never Stop Loving You” star who will be headlining on the Friday night. She was there on the opening night 30 years ago and now returns to celebrate 3 decades of Cruz 101.

We are extremely delighted to announce that pop sensation Ella Henderson will be live on stage at Cruz in two weeks time for our 30th Birthday celebrations ????

The “Let’s Go Home Together”, “This is Real” and “Ghost” star, who rose to fame following her appearance on the X factor in 2012, will headline part two of our birthday event on Saturday 28th May.

This is THREE DECADES of Manchester’s no.1 LGBTQ+ nightclub.  And you are invited

We expect this event to sell out, so advance tickets are advised to avoid disappointment.