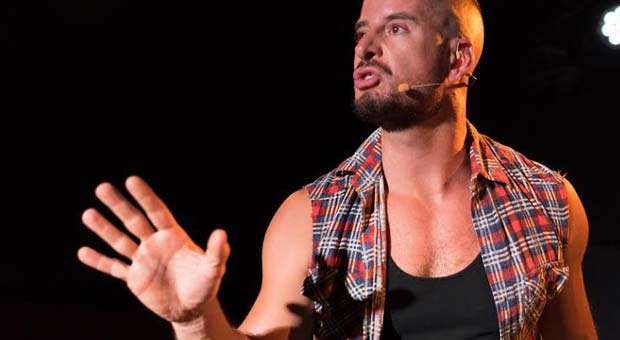 A powerful verbatim theatre piece exploring the history of the LGBTQ rights movement is about to begin a UK tour, with 7 confirmed venues and more to be announced shortly.

This new tour follows a sold-out West End performance and a summer 2018 run in the Kings Head Queer Season.

Written and performed by Alexis Gregory,Riot Act is a hard-hitting, hilarious and heart-warming solo verbatim piece, taking audiences on a breath-taking journey through six decades of queer history.

Created from the playwright’s interviews with Michael-Anthony Nozzi, one of the only remaining Stonewall survivors; Lavinia Co-op, a 1970s London radical-drag artist; and Paul Burston, a prominent 1990s AIDS activist.

It promises to be a riot!

Producer Rob Ward said:"With recent developments in Brunei as well as protests outside primary schools in Birmingham, 'Riot Act' provides a timely reminder just how precious these rights are and how passionately they must be defended.

“We are incredibly proud to present 'Riot Act' to audiences across the UK this Pride season."

Alexis Gregory, the writer and performer of one man show Riot Act spoke to Drew Tosh.

The play represents three voices across six decades of queer history. Did you choose these people for specific reasons or was it more organic?

A bit of both. The starting point was Michael-Anthony Nozzi, one of the only remaining Stonewall survivors, who asked if I wanted to use his story. It covers 1960s America and then moves to the UK in the 70s which is where Lavinia Co-op, a London radical 1970s underground drag queen’s story fits in. I also wanted to feature the AIDS crisis in the 90s and asked my good friend Paul Burston, a prominent 1990s AIDS activist, if I could use his story. I was really pleased that everyone came on board.

How do you make material with potentially heavy content, entertaining and engaging for an audience?

There is a lot of humour in the piece with jokes even in the HIV/AIDS section. You need those moments because we’re dealing with quite intense, in your face, sensitive issues. There’s comedy in everything I write and I place these moments in places where I think they need to be. How you deliver the lines and put them in context is really important as it helps to find the humour.

How important do you think it still is to be doing a piece like this in 2019? Have we moved on at all or can you never tell these stories enough?

I think the need varies. We kind of had to move away from looking at HIV and AIDS a little and explore other issues because it was too painful and also because there are other queer stories to be told. It is so rare to get a Stonewall story from someone who was there that night because most of the people involved are dead so any time is a good time to hear about that. Themes like activism, social awareness and political injustice are really in the news now so it is a really good time to look at that. In Riot Act each story goes from its particular era into 2019. The piece itself spans six decades until the present day so the stories are very current. I’m fascinated by the queer experience and, without trying to sound naive or dismissive, I don’t consider it as history. They’re just stories that happen to have happened at another time. The piece asks questions of the audience and pushes their buttons. It isn’t PC, the humour is outrageous and its like having three interesting guys round the dinner table telling their best stories.

Its a verbatim piece so you cant really ad lib. I imagine this brings an extra pressure to get it spot on each time?

It is really hard with an hour of dialogue to learn and I have to be truthful to what they said. I write in a way that jumps about but its a bit like poetry and there’s a rhythm to it. It was tough but it really worth it and it does get easier to re-learn it each time. At one point I did wonder what I’d let myself in for but my director Rikki Beadle-Blair was brilliant and got me through it by creating a really calming environment for me to rehearse in.

I’m shaking my head just thinking about them. I don’t like to use the word ‘terrified’ because I think it dis-empowers us but I think we have to be very careful and vigilant We’ve had so many advances in our community over the last few years but, as is being shown, these advances can be taken away at any time. We’re living in turbulent times where we have ideology coming to the forefront supposedly providing us to the answers to all our problems. Its the minority groups that get scape-goated. As LGBT rights advance, there’s also a backlash as there are people who are not happy about it. We just have to keep going. The play explores what its like to be a gay man in 2019 as well as looking to our past, linking political activity from the Stonewall era to now.

A lot of people get confused by all the letters in LGBTQ and what they represent. It can be confusing and a lot to take on board for even the most genuine of supporters. The wider community can be fearful of unintentionally offending.

I’m a strong believer that we don’t have to jump down people’s throats if they make a genuine mistake. If someone is clearly being intentionally provocative and offensive that’s a different matter but there are gentle ways that we can all move forward together. A climate of fear is unproductive and can provoke a backlash where people feel they are being repressed. People don’t like to admit things are complicated, preferring to think things are one way or the other but we’re human. If there are complications we have to allow each other to make mistakes on both sides. How we deal with them is how we move forward.

It could be compared to politics at the moment with party in-fighting rather than looking at the bigger picture.

I look at that in the play. It’s a very honest exploration of our community. We talk about gay men who don’t like lesbians, misogyny, ageism. I pick people up on that last point all the time and the play talks about the inter-generational experience. If you’re a gay man who doesn’t want to hang out with another gay man who is ten or more years older than you, you might be missing out on a really good friend who is experienced and can really enrich your life. I look at the obsession around youth and beauty. Often, when people are trying to put you down because you’re older, its because of fears and insecurities about their own youth passing. I have friends of all ages who I hang out with and learn from. Why do we as gay men have to put other gay men down?

What do you hope audiences will come away with from the show?

I want them to be entertained, have a laugh, understand the characters and hopefully learn stuff they didn’t know. It is a hard hitting play but funny and engaging and I want audiences to be uplifted and inspired.