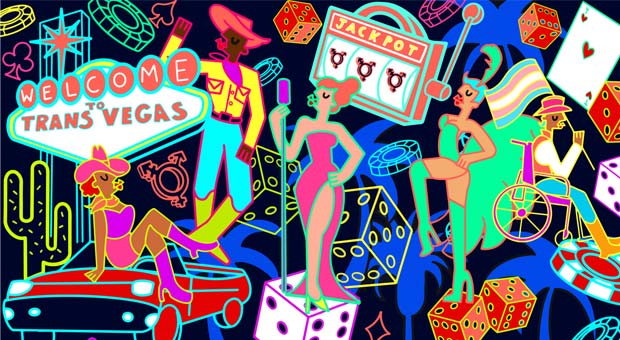 Trans Vegas is back! The UK's largest trans arts festival, celebrating trans and non-binary artists from Manchester, across the UK and beyond,is to presentsix events over five months and for 2022, Trans Vegas focuses on non-binary artists and the full programme will be announced over the coming weeks.

From July 25th, Trans Vegas is excited to exhibit an installation from 23-year-old, non-binary, painter and illustrator Ashton Attzs. The theme ‘And THEY Lived Happily Ever After’ is represented via Ashton’s utopian vision and will be displayed in the Feel Good Club windows in Manchester’s Northern Quarter.

Ashton’s work is colourful, bold, joyful and unapologetic. Ashton covers topics including LGBTQ+ advocacy, visibility, unity, positivity, music and mental health. In the media, trans people are often the villains and this vital instillation features some favourite queer villains and re-presents them in a world where they live happily ever after.

Their world-building is realised in bright hues,envisaging an inclusive ideal where anyone can step inside a dreamy landscape and uplifting space. Trans Vegas invites audiences and visitors to experience Ashton’s installation from July 25th- August 13th.

Trans Vegas first live event for 2022 is on August 5th at Feel Good Club launchingTravis Alabanza’s new memoir None of the Above. Travis’s reading will be followed by a panel discussioncurated andled by Travis featuring key UK Black and Brown trans and non-binary writers including journalist Jackson King, performer Maz Hedgehog and activist Sabah Choudry.

Travis Alabanza is one of the UK’s most prominent trans activists. In 2019 the Evening Standard listed them as one of the 25 Most Influential People under 25. More recently they were picked as one of Bernardine Evaristo’s ‘Ones to Watch’ in Sunday Times Style and were also chosen as one of Forbes’ 30 Under 30in 2021. In their new book, Travis examines seven phrasespeople have directed at them about their gender identity, which include some of their most transformative experiences as a Black, mixed race, non-binary person.

“Because the world may never be the same again, this year Trans Vegas is trying something new. Rather than a one weekend festival, we have 6 events over 5 months.

This year, we are centringnon-binary artists, moving the festival beyond gender and into the magic of our reimagined Vegas, as captured beautifully by painter and illustrator Ashton Attzs in their exciting, nocturnal, neon world created for our lead festival image. Deliberately vibrant and sexy, featuring dandy cowboys, trans flag waving wheelchair users, queer “showgirls” of colour all under a big welcome sign. Ashton’s art reflects the programme and our ambition for trans people to feel welcome in a world which is currently a politically and socially scary place for us.

Manchester has once again opened its gorgeous Northern arms to us, providing intimate, rich and historic queer spaces for us to celebrate and feel safe in.

The Feel Good Club takeover is a festival in one night. We are taking over the venue, windows and all, as we kick off the festival with public art insulation.”And THEY all lived happily ever after" reminds us we are not the villains in fairy tales .. they live outside our kingdom. Travis Alabanza makes a welcome return to Manchester and we get to feast on their brand new book ‘None of the Above’ and hear from a panel of handpicked guests. We end the night with a wicked A-POC-ALYPSE cabaret curated and hosted by The BollyWitch.

Over the next 5 months we get to introduce our proud trans Dandies at Manchester City Art Gallery, head off to one of Manchester oldest Queer pubs: The New Union, to honour its wonderful, sordid history with a down and dirty recording of the Perverts Podcast, face death head-on with Jamie Hale’s show ‘Not Dying’ at HOME alongside the unapologetic CRIPtic Cabaret.This year, Trans Vegas continues to rewrite the trans narrative, ignore the ‘gender debate’ and create a life changing space in the north of England to be with our beautiful community”

The Trans Vegas launch event will be followed by Trans Filth and Joy at Manchester Pride - Opening Manchester Pride, Trans Vegas takes over the Alan Turing stage, throwing a queer dance party featuring the hottest of trans talent and you guessed it - Pure trans FILTH! Drag, kink, cabaret, community - bring your nearest and queerest to kick off pride. 16+Curated in partnership with Milk Presents.Friday 26th August 2022

There is much more to come this Autumn includingDandy Style, which sees a collaboration between Trans Vegas and Manchester City Art Galleryplus a landmark recording of The Pervert’s Podcasts with Milk Presents at the historic New Union, Canal Street in the heart of Manchester’s Gay Village. Finally, a double bill at HOME this November of Jamie Hale’s Not Dying and their CRIPtic Cabaret, directed by Athena Stevens. Dates and details to be announced in the coming weeks.