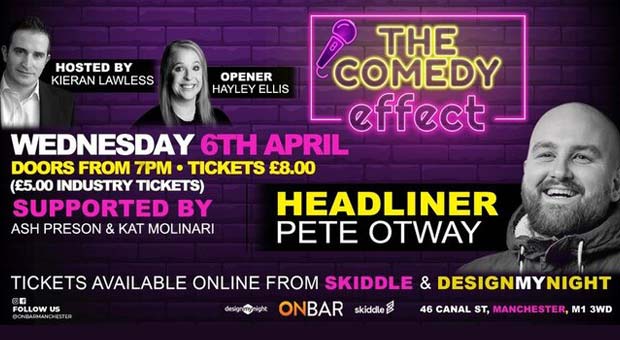 Launching Wednesday 6th April from 7pm at On Bar Manchester With Kieran Lawless hosting he is joined by 4 of the Northwest’s top stand up comedians!

Opening the show we have the wonderfully brilliant Hayley Ellis!

A comedian and actress getting ready to take her brand new show on a nationwide tour early next year!

A fantastic act whose been in loads of dead prestigious joke lists such as The Independent - “Edinburgh Fringe: 25 funniest jokes of all-time"

The Mirror - “Edinburgh Fringe: Best 21 jokes told at the festival in the last decade"

Hayley is a former regular sight gag contributor for Russell Howard's Good News and has appeared on MTV’s “Why aye love Geordie Shore” and “Comedy Set Lists” for Virgin television. She can also sometimes be heard on your wireless. (Absolute Radio) and her sketches and jokes have appeared on Newsjack (Radio 4)

"Brilliantly funny and a joy to watch" - Sarah Millican

And headlining for us is the fantastic Pete Otway!

Mixing a razor sharp wit with an affable charm and creative writing, Pete Otway has established himself as a natural and original comedian.

Whilst regularly appearing at some of the biggest comedy clubs and festivals across the UK Pete has also provided tour support for acts such as Lloyd Griffith and Doc Brown.

‘An amazing comedy talent, and we are making sure we follow his every move in his ever rising career.’ - Crispy Comedy Cuts

supported by the amazing Ash Preston and Kat Molinari.

This is a night not to be missed tickets grab your tickets online NOW to avoid disappointment.