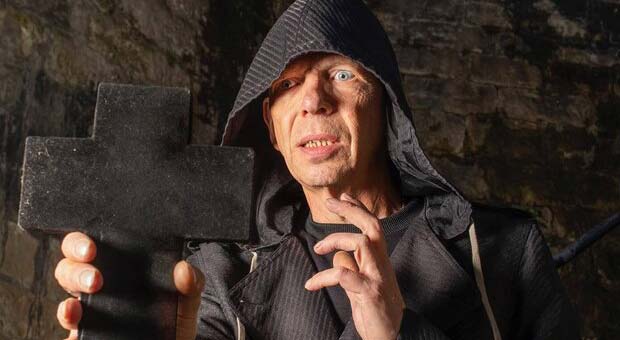 The Canonisation of (Saint) David Hoyle

As a finale to Derek Jarman PROTEST!, the exhibition’s artist in residence Jez Dolan and The Manchester Sisters of Perpetual Indulgence are holding the canonisation of internationally acclaimed performance-art icon, David Hoyle, hereafter to be referred to as Saint David of the Avant-Garde, in the renowned splendour of Manchester Art Gallery.

The Sisters of Perpetual Indulgence (est. San Francisco, Easter Sunday 1979) are a worldwide order of queer nuns, with the Manchester House established in 1996. The tenets of the order are the promulgation of universal joy and the expiation of stigmatic guilt. It is with this in mind that The Sisters will be making their first English Saint since Derek Jarman (Saint Derek of Dungeness) in 1991.

As is traditional and time-honoured in these matters, the ceremony will begin with the procession of the Saint-to-be through the streets to the place of canonisation. The procession, accompanied by the Eclipse New Orleans Parade Band will begin from New York New York, a legendary queer space in Manchester’s gay village for over 30 years. The parade will continue to Manchester Art Gallery accompanied by flags and banners, smoke and mirrors, to the ceremony of canonisation within the Derek Jarman PROTEST! exhibition.

Derek Jarman PROTEST! is organised by IMMA, Dublin, in partnership with Manchester Art Gallery and the Yale Center for British Art. The exhibition has been developed in close cooperation with the Keith Collins Will Trust, James Mackay and Amanda Wilkinson Gallery.