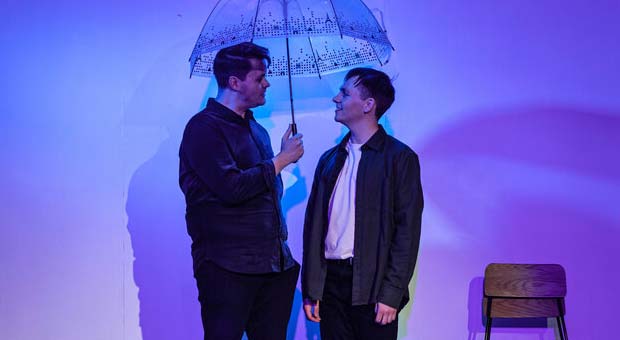 Tell Me Straight tells the honest and heartwarming tale about a young Londoner who is approaching the big 3 0, who is trying to find his way.

Gartland Productions are pleased to announce the return of Offies Commendation production, Tell Me Straight by Paul Bradshaw.

Following a hugely successful run in this year’s Queer Season at the King’s Head Theatre, the revival of Tell Me Straight will open at the Hope Mill Theatre, Manchester on 26th October 2021 before opening at the Turbine Theatre, London on 2nd November 2021.

Paul Bradshaw, writer and co-star of Tell Me Straight said “Tell Me Straight draws on my previous experiences but frames them in a new narrative. This fresh and dynamic production highlights the sexual encounters that made me who I am, both the good and those I’d rather forget… not only to make you laugh but to also remind you, you are not alone”

Paul Bradshaw co-stars in his hilarious and fast-paced one-act production with George Greenland and Stephanie Levi-John.

Tell Me Straight tells the honest and heartwarming tale about a young Londoner who is approaching the big 3 0, who is trying to find his way. His life, like everyone else’s, needs to change! For the next thirty days, he will be getting his sh*t together; no booze, no fast food and no shagging…but it’s never that easy, eh?

His long-suffering bestie Dani has heard it all before – she’s done with his never-ending line of sexual conquests, all with the one thing in common, they’re straight!

Babe, you need to find a gay man, who actually likes gay men.

But it seems straight men are like buses … In seventy-five minutes, our young Londoner meets Matt, the city boy, Ryan, an actor currently selling perfume, Lee, a fresh-faced grad, and Alex. Are any of them gonna be the one?

Paul Bradshaw, writer and co-star of Tell Me Straight said: “I think there’s something for everyone! This play captures those moments we’ve all felt when swept up in the nervous and fizzy energy when you first start seeing someone. It’s playful and exciting but how long can that spark last? Is it healthy? Is it always a good thing? Tell Me Straight explores that and ultimately poses the question of - do we attract a certain type of person or are we seeking that kind of person?”

Tell Me Straight is directed by Imogen Hudson-Clayton with assistant director Hiba Elchikhe.

Writer Paul Bradshaw and producer Liam Gartland are thrilled that the returning company of Tell Me Straight are composed of queer and/or working-class artists.

Paul writer of Tell Me Straight said: “It’s time to have rooms where the whole company is made up of the people reflected in the work. Representation matters, and we’re excited to get started with this team.”

Liam Gartland, Executive producer at Gartland Productions said: “'After a short run at The King's Head Theatre, Tell Me Straight received fantastic five-star reviews and an OFFIES Commendation which gave me no other option than to carry on sharing this story with audiences. As a queer theatre producer raised in Manchester, I knew this was a story that needed to reach further afield. Opening the show at The Hope Mill, a place that has inspired me from the beginning, marks a special moment in my career.'

Tickets for Tell Me Straight at both the Hope Mill Theatre and Turbine Theatre are on sale from Monday 20th September 2021. Click READ MORE to buy.