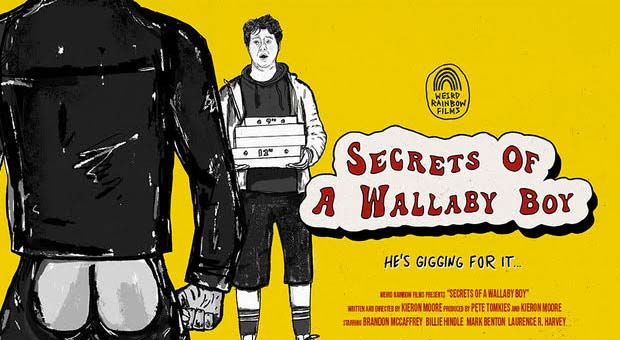 Secrets of a Wallaby Boy: A new film

Secrets of a Wallaby Boy is a modern, queer update on the cheeky British comedies of the ‘70s, such as Confessions of a Window Cleaner. From Weird Rainbow Films – the team behind 2018's Spectrum – it is a 70-minute feature set to be shot in

When Tim becomes a courier for the app Wallaby, he reckons he can turn his life around: get fit, earn some money, and even get laid. He’s not accounted for his own haplessness, an antique teapot collection, and a sinister conspiracy.

Also involved is animator Ilan Sheady of Uncle Frank Productions, who is bringing to life Bruce, the marsupial mascot of the Wallaby app.

To help make the film be the best it can possibly be, the team are holding a crowdfunding campaign, which is live now on Greenlit.com. For pledging money towards the production of the film, a number of rewards are being offered, including

“I’m really passionate about LGBTQ+ storytelling and also weird silly comedy. Last year, I was introduced to Confessions of a Window Cleaner and that genre of British smut comedies from the ‘70s, and I thought – these are great, but what if they were

“I intend for Secrets of a Wallaby Boy to be a fun time for all viewers. It’ll offer positive and diverse LGBTQ+ representation – progressive but not preachy. It’ll be the kind of film that plays at the evening of a festival and gets people talking in the bar

“When people ask me what exactly it’s about, I just say hijinks. The script is bonkers – when I first read it, I went, this is crazy… but then again, everything written by Kieron always is.”