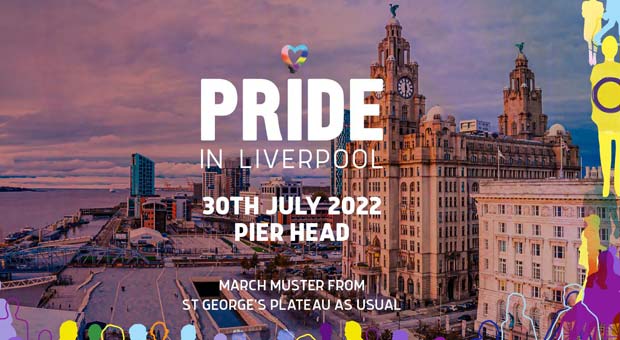 LCR Pride Foundation, the organisation responsible for delivering Pride in Liverpool, has announced that this year’s free festival will move from its usual site on Tithebarn Street to Liverpool’s world-famous Pier Head.

Pride in Liverpool 2022 returns on Saturday 30th July after a two-year hiatus due to the pandemic. The change in location comes due to circumstances beyond the organisation’s control, after it was informed that roadworks were due to start imminently on Tithebarn Street, meaning the original planned site would not be “not safe or viable” for the event on the day.

The change in festival site will also alter the route for the city’s annual March with Pride, where members of the LGBT+ community and its allies march through the city’s streets in protest, celebration and solidarity. However, as in previous years, the march will start from St George’s Plateau.

Andi Herring, CEO and Co-founder of LCR Pride Foundation said: “While a change in site so late in the planning stages of Pride in Liverpool is never ideal, the safety of those attending and working at the festival is paramount.

“We have a dedicated team of event professionals, suppliers and traders who have been working tirelessly to ensure that we are able to come together at the new site for the celebration that our community deserves and has been eagerly anticipating.

“Despite the change in location the event remains completely free and we are sure that Pride In Liverpool at Pier Head will be worth the wait. We are also continuing to work and support businesses in Liverpool's Pride Quarter and across the city with their plans for the day,  so the whole city can show its support for our LGBT+ community. With LIMF also taking place in the city, we’re expecting a busy weekend!

“We would like to extend our gratitude for the support provided by our sponsors, in particular Barclays, and all of our joint partner agencies, emergency services and city council teams that are assisting with the planning of this year’s event and late notice change to our site.”

LCR Pride Foundation has revealed its full, community-driven line up for Pride in Liverpool 2022 and invited the city’s LGBT+ community, allies and supporters to ‘come together’ on Saturday 30th July for the free event at Liverpool’s Pier Head.

The Barclays Main Stage provide a platform for a host of local talent from across the city region, with performances from​​ Trip Advisor’s Customers Choice No.1 LGBT venue in THE UK, Linda Gold’s FunnyBoyz, scouse powerhouse vocalist, comedy hostess and distant relative of Cilla Black, Filla Crack, who will perform with previous Vogue Ball winners, House of La Porta, Young Homotopia and Many Hands, One Heart.

There will also be representation from some of local LGBT+ venues, bringing OMG, The Lisbon and Superstar Boudoir’s best-loved performers and hosts to the Pride in Liverpool stage.  Radio City and Hits Radio Pride Breakfast “Loud and Proud” presenter, Jordan Lee, will kick off the show, with The Guide’s Jay Hynd, making his sixth appearance on the main stage, also hosting throughout the day.

The fantastic line-up of homegrown talent join the bill alongside disco legends Boney M. featuring Maizie Williams, who will headline the event. Pride in Liverpool had been due to be headlined by Irish pop legend, Samantha Mumba, who pulled out of the gig due to problems with travel from the US.

As well as the Barclays Main Stage, Pride in Liverpool will also welcome the Film with Pride Cinema Lorry, sponsored by UNISON North West LGBT+ Group, which will be showing The Adventures of Priscilla, Queen of the Desert (15), Hedwig and The Angry Inch (15) and Cabaret (15). Tickets will cost £3 and can be purchased on the day or in advance online. As all films are rated 15, proof of age will be required.

LCR Pride Foundation CEO and Co-founder, Andi Herring, went onto to say: “We know from conversations with the community that our audience comes to Pride in Liverpool to support homegrown and upcoming talent, as well as our headline act. To this end, we have a truly fantastic community-driven line-up for the day and representation from some of our local LGBT+ venues, who will bring some of their best-loved performers and hosts to the stage.

“Our free festival has always been a grassroots event, with a focus on our community here in the Liverpool City Region and we look forward to being able to come together to celebrate this on Saturday.”

For all the latest information and updates, visit prideinliverpool.co.uk