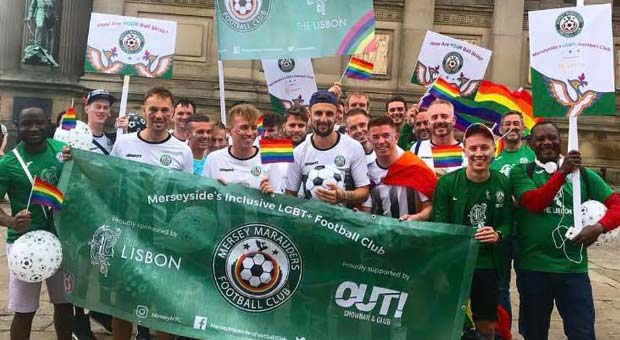 Mersey Marauders host Magnificent 7s Merseyside's Gay and inclusive Football Club are proud to host the 30th anniversary GFSN Summer Get Together in Liverpool. 2019 marks 30 years since the establishment of the Gay Football Supporters' Network (GFSN) who host a national league and campaign to tackle homophobia, biphobia and transphobia in football.

The highlight of the 3-day event will be the GFSN's annual summer tournament on the 15th June.

Mersey Marauders have partnered with Liverpool County FA to deliver a day of 7-aside football at one of Liverpool's new football hubs. Football Development Officer Steve Swinnerton said 'Liverpool County Football Association are delighted to be involved with Mersey Marauders hosting the GFSN Summer Tournament through our inclusion work and this event will show that football is for all. "We look forward to a great day of football in our city at Heron Eccles playing fields, one of the excellent new Parklife facilities, and hopefully everyone involved will enjoy a fabulous football tournament." Mersey Marauders are one of a host of GFSN teams who will be drawn out of the hat at the club's sponsors the Lisbon Bar in Stanley Street's gay quarter on the eve of the tournament.

Liverpool City Region Metro Mayor Steve Rotheram has welcomed the return of the GFSN Summer Get Together to the city region: "Football has always brought people together and I applaud the work of the Gay Football Supporters' Network in tackling prejudice and helping to create a truly inclusive environment in which everyone can enjoy football. I'm very proud that Mersey Marauders have brought this tournament back to our city region and I'm sure that they and Liverpool County FA will make it a real success."

On the evening of Saturday 15th June there will be an awards ceremony and networking event held at the prestigious Liverpool Town hall. Drinks and canapes will be followed by the awards, entertainment and the chance to meet and speak with people from LGBT and non-LGBT backgrounds, from all over the Country and beyond. Councillor Wendy Simon, deputy Mayor of Liverpool and Cabinet Member for Sport and Culture said: ‘ "I am delighted that Liverpool has been chosen to host this prestigious 30th anniversary event for the Gay Football Supporters Network.

Liverpool is world famous for its football and as a welcoming and tolerant city and the city council is proud to support the Mersey Marauders in their efforts to showcase both of these qualities." Andi Herring , co chair and operations director at LCR Pride, said: "LCR Pride Foundation are really pleased to be supporting the Mersey Marauders in hosting the GFSN National Tournament for the first time since our 2008 Capital of Culture year. We're looking forward to a successful event and being able to show the great work happening in the Liverpool City Region, not least our intention to bid for the Gay Games 2026!" Mersey Marauders were formed in 2005 with the aim of providing gay men from Liverpool and the surrounding areas the chance to play football in a supportive and inclusive environment. Liverpool last hosted the GFSN Summer Get Together in 2008, an apt setting as the city was that year named the European Capital of Culture. Club Chairman Paul Williams said: "We are very much looking forward to hosting this year's Summer Get Together and the opportunity to highlight and promote the excellent work of the GFSN and its members over the past 30 years.