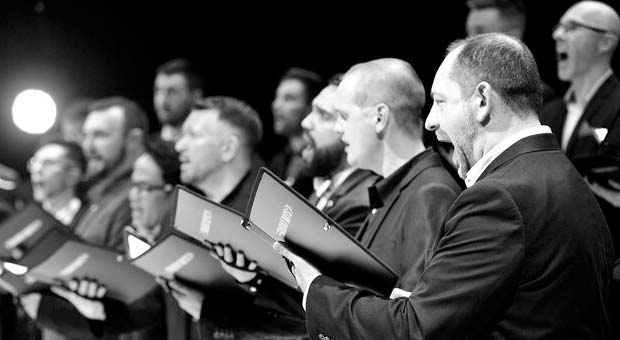 The Sunday Boys have been nominated for their work engaging LGBTQ+ people across Greater Manchester to sing and create music together over the last 5 years,and also for providing a lifeline to many in the community who have been at higher risk of social isolation and poor mental health during the pandemic.

Members of the public can vote for The Sunday Boys, or any of the other fantastic projects, online on the National Lottery Good Causes eebsite or on Twitter using the #NLASundayBoys hashtag.

Vote for The Sunday Boys

The Sunday Boys was formed five years ago by Manchester-based composer and conductor Michael Betteridge, who wanted to create an inclusive LGBTQ+ choir for low voiced singers in the city to enjoy music, perform and make friends. The choir provides an ambitious, innovative and safe space for LGBTQ+ people and their allies to come together, connect and grow through their love of music and music making. The Sunday Boys tell queer stories through choral singing and provide an important voice for the LGBTQ+ community.

When the pandemic halted rehearsals last year, The Sunday Boys were determined to keep making music together. Providing a sense of community and support through music has been vital as LGBTQ+ people have been at higher risk of social isolation and poor mental health, along with restricted access to specialist health provision. Greater Manchester in particular, a region with one of the UK’s highest LGBTQ+ populations, also faced many more periods of lockdown and isolation than other parts of the UK.

In response to the nomination Michael Betteridge, Artistic Director of The Sunday Boys, said: “We are so excited that The Sunday Boys are finalists in this year’s National Lottery Awards. The Sunday Boys were created to give Manchester an inclusive LGBTQ+ choir for people to learn how to sing great music, perform and of course make friends. It’s amazing to see the impact the group has on not only its members, but the people we perform too as well. We are really proud of the work we’ve done in the local LGBTQ+ community and the funding received from the National Lottery has been pivotal our success.

“Regardless of the outcome, it’s been incredible to be recognised for everything that we do – it’s a real honour and we really hope people will get behind us for the vote and beyond!”

Jonathan Tuchner, from the National Lottery, added: “In these challenging times that we still find ourselves in, we see so many examples of inspirational work throughout our communities, driven by these very projects. It’s thanks to National Lottery players, who raise more than £30 million each week for good causes, that brilliant projects like these, are possible.

“The Sunday Boys have done some fantastic work within the LGBTQ+ community and they thoroughly deserve to be in the finals of the National Lottery Awards Project of the Year 2021. With your support, they could be a winner.”

During the pandemic The Sunday Boys haveundertaken a number of creative musical projects ranging from the sombre to the hilarious. In July 2020 they launched their first digital concert ‘At Home with the Sunday Boys’ featuring a mix of new and archived material and recorded a video of ‘I Carry Your Heart with Me’ for the Manchester Pride online vigil. They also created music videos for Queen’s ‘I Want to Break Free’, Joni Mitchell’s ‘Urge for Going’,as well as ‘Summer’s Gonna Come Again’, a new commission with Manchester playwright Joshua Val Martin, all inspired by the emotions felt by many members of the choir during lockdown.Most recently Michael Betteridge won the Making Music Award for his arrangement of Swedish folk song ‘Summer Will Come Again’ featured in the ‘Summer’s Gonna Come Again’ commission.

One of the biggest lockdown projects of the pandemic was a brand-new collaboration with Scottish composer and singer-songwriter Finn Anderson and the North West’s largest performance venue, The Lowry, funded by Arts Council England. Finn Anderson (composer of Edinburgh Fringe and Southwark Playhouse hit musical ‘Islander’, and solo album ‘Until the Light’) wrote ‘Distant Dream’ in collaboration with the choir. It is a moving song about speaking back to your younger self and offering words of reassurance. Both the audio and music video were recorded in The Lowry’s Lyric Theatre.

‘Distant Dream’ was released by The Lowry as an online film as part of their Love Lowry digital programme and has since been performed live at Manchester Pride’s vigil this year after it resonated with HIV activist and actor Nathaniel Hall (Donald in Russel T Davies‘It’s A Sin’, broadcast by Channel 4 earlier this year). The choir performed the song to a crowd of thousands after a powerful speech by Nathaniel Hall and it was accompanied by a moving dance by North West company HawkDance.

To rehearse for ‘Distant Dream’ and Manchester Pride, the choir has been rehearsing both online and ina multi-storey carpark in Manchester’s city centre. In a specially commissioned documentary about the project, several choir members speak about the sense of community and support that the choir offers:

Joseph Owen, tenor,said: “Having the choir as a queer space with other people who have shared interests has made me feel less alone.”

José Peixoto Coelho de Souza, baritone, said: “I really needed a place where I could have a sense of belonging. I had just come out, so having the chance to be singing, even remotely, with other gay people has been priceless… The chance to be part of something bigger, and doing something you love.”

During the pandemic The Sunday Boys continued to attract new members to join the choir and have actually increased their membership.

Click here for short documentary on the making of Distant Dream

The Sunday Boys are an unauditioned LGBTQ+ low voice choir in Manchester meeting every Sunday at 5.15pm at Halle St Michael’s in Ancoats. To enquire about joining the choir visit the choir’s website: www.thesundayboys.com/sing-with-us

To vote for The Sunday Boys for The National Lottery Project of the Year Award, visit www.lotterygoodcauses.org.uk/projects or use the #NLASundayBoys hashtag on Twitter. Each person can only vote once on Twitter and once via the website. Voting runs from 6th September until 5pm on 4th October.

ABOUT THE SUNDAY BOYS

The Sunday Boys was formed by Michael Betteridge in January 2016 to give Manchester an inclusive LGBTQ+ choir for low voice singers in the city to learn to sing great music, perform and make friends.

The Sunday Boys is open to any one who sings with a low voice (ie tenor or bass) and wants to sing in an inclusive and friendly environment. You don’t need any singing experience to join, just a desire to learn, make music and give it a go. We offer vocal coaching and singing lessons to all involved and you’ll be supported every step of the way.

We’ve performed across the country and even embarked on an international tour of Iceland. We often invite workshop leaders to rehearsal to help us focus and improve on specific topics and take great pride in supporting artists and regularly commissioning new work.

The Sunday Boys at Christ Church in Didsbury, photo by Black Rock Creative

Michael is a composer and choral conductor based in Manchester, UK.

As a conductor specializing in working with non-professionals singers he has led choral and opera performances across the UK and further afield most often giving new works their premieres, including some of his own. After studying composition at the Royal Northern College of Music he was one of the first recipients of Sing for Pleasure’s Young Conductors Programme in 2013.

Since then he has premiered works by Philip Venables (CAKE: Ubi Caritas), Kerry Andrews (Fox Pop), Anna Appleby (1967 in the Red House and Dust) and Chris Roe (Visions of Paradise), amongst others. In April 2016 he conducted the world premiere of Andrew Keeling’s community opera Get Weavin’ at the Bridgewater Hall in collaboration with Chetham’s School of Music for over 200 performers.

As Artistic Director of The Sunday Boys, Michael aims to provide excellent participatory and musical opportunities for adult low voices in and around Greater Manchester.

As a composer his work is performed across the world being described as ‘inventive’ (The Financial Times) and ‘bold’ and ‘colourful’ (The Times). Michael’s work has been nominated for an Icelandic Music Award (#echochamber) and a Royal Philharmonic Society Award (Across the Sky).

• All voting will be independently adjudicated and verified.

• To find out more about the positive impact playing The National Lottery has, please visit www.lotterygoodcauses.org.uk

This year there were over 1700 nominations for ‘The National Lottery Project of the Year’ with 17 finalists nominated for public vote. The winner will receive a £3,000 cash prize for their organisation and a coveted National Lottery Awards trophy.