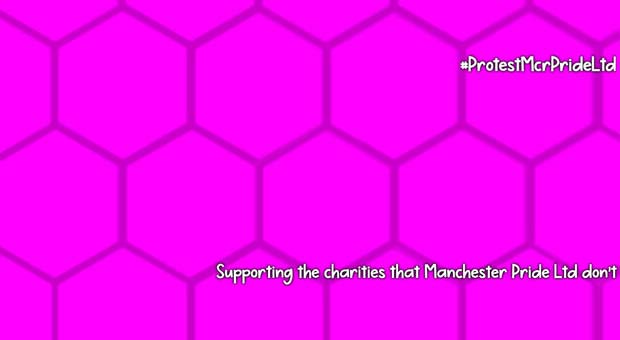 On Saturday 21st of August 2021, members of Manchester’s LGBTQ+ community gathered in Sackville gardens, in the heart of Manchester’s Gay Village, to attend the “Reclaim Pride” protest against Manchester Pride Ltd., after recent revelations concerning funding cuts to charities the LGBT Foundation and the George House Trust, and the cancellation of the annual Pride parade.

At the event, volunteer Andrew Davies, 42, a member of Manchester's LGBTQ+ community for the past 13 years, a computer games programmer and part time drag queen ‘Joanna Cuddle’ (“Do-you-want-to cuddle”), gave a speech about how Manchester Pride Ltd.’s actions had affected him and driven him to action, as he announced the launch of the “Bee Proud 2 Donate” initiative.

The initiative is a local LGBTQ+ community led scheme to protest against Manchester Pride Ltd. Volunteers will be handing out 20,000 free "protest bands" at the entrances to Manchester’s Gay Village over the Pride weekend (27th to the 30th of August, 2021). The volunteers will also be encouraging donations to LGBTQ+ charities and community groups through the use of a "Charity Fact Sheet" with embedded QR codes that can be scanned in on mobile, to directly link to the charity or group's donation page, thus making the system transparent, and immediately and directly benefiting the community. Donating to charity is not a condition of getting a protest band as the initiative believes that this should be free and accessible, so all people can take part, especially those with low economic means.

The bands display the Bee Proud 2 Donate’s mascot “En Bee” the non-binary worker bee, a symbol of Manchester’s hard working community adapted to represent the LGBTQ+ community, including trans and non-binary, black and brown, asexual and intersex people, their supporters and others. The pink band represents the colour used to identify and persecute queer people during the holocaust.

The main message printed on the protest band “Bee Proud 2 Donate: Supporting the LGBTQ Charities Manchester Pride Ltd. don’t” sums up the aim of the initiative, to protest against the lack of transparency and actual support of the local LGBTQ+ community from the Manchester Pride Ltd. charity organisation, in particular the revelation that only 3.1% of it’s £3.9 million revenue in 2019, went to other charity and community groups, whilst the CEO, Mark Fletcher, received a salary of £90,000+ or 2.2%. The aim is to raise money by direct donations to the LGBTQ+ charities and community groups that have been poorly served by the charity, especially after a year of underfunding due to COVID.

During the speech, Andrew said:

“I have been slow to wake-up to the damage caused by Manchester Pride Ltd. In previous years I have fallen to the propaganda of the media machine, and viewed people that wanted to assert their right of way through the village as an annoyance - that is my fault, and my shame.”

To me - the final straw was the removal of funding from the LGBT Foundation safe sex packs and The George House Trust. I was complacent when they ‘came for’ others, and now they had ‘come for’ me. My shame, and one that drives me to action.

Now's the time for change!

Now's the time for protest, for charity giving, for community support, and for a party for us to celebrate our lives!"

The “Bee Proud 2 Donate” initiative is looking for volunteers to staff the donation stations around Manchester’s Gay Village over the Pride weekend (27th to the 29th of August), and can do so by applying to join the “Bee Proud 2 Volunteer” Facebook group. They are also looking to support the other independent protest efforts, such as the Manchester Pride Protest March on Saturday the 28th, which includes marching through Manchester’s Gay Village and along world famous Canal Street.

Manchester Pride said; “We are sad that our regular Manchester Pride Parade will not be able to happen this year but we are intending for the marches to keep the spirit of protest very much alive.  We are aware that there are other protests happening across the city over the weekend too and we are working closely with their organisers and the local authorities to keep the city safe and ensure that everyone who wants to march can.

“The right to protest is something that we hold as such an important human right but we want to stress that it isn’t more important than the right for equality and inclusion. We will not tolerate hate speech or actions towards any LGBTQ+ people from any of our communities and we ask that those that wish to cause hurt or disruption stay away.”