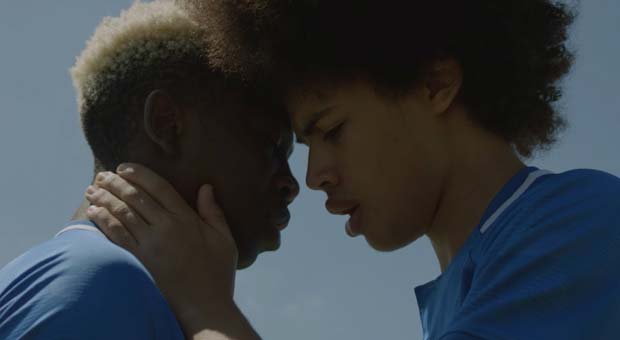 The new ‘album-in-progress’, WOLF HOURS from Minute Taker (Ben McGarvey) forms as part of the soundtrack to his latest audio-visual show, a surreal, nocturnal journey into the psyches of gay men at different points in time, which is on this Friday 24th January 2020 as part of Hope Mill Theatre’s ‘Turn On Fest’.

We sat down with Ben to discuss WOLF HOURS and his life as a musician:

Where did the inspiration for WOLF HOURS come from?Well I’d been wanting to make a gay themed show for years really as I’ve often wrote songs about my own sexuality and experiences with relationships and the gay scene.  Putting it all into songs really helped me a lot with coming to terms with my feelings and understanding myself.  I thought it would be great to take some of those songs along with some new ones and instrumental pieces to make a whole show, with visuals too, working with a range of different filmmakers and artists.

The films were inspired by my research, my own experiences and those of the other artists too.  I read a tonne of biographies of gay men and watched documentaries while devising the show.  It all fed into the ideas for the characters along with first hand interviews I did with gay/bi men who kindly volunteered to let me interview them when I put a call out on my Facebook and Instagram.  It was fascinating to get all of these unique stories and perspectives, a lot of which resonated with my own.

Visually I was inspired a lot by dream sequences in movies, particularly older movies from directors like Alfred Hitchcock and Dario Argento. I loved how surreal, atmospheric and beautiful they were and I decided to make all of the films an individual character’s dream sequence.

The show premiered initially at Waterside’s REFRACT festival in July 2019 in Manchester - has it changed much since then?

Yes it’s evolved quite a bit since then.  I’ve been holding post show discussions to chat to the audiences about the themes and the development of the show and it’s been really useful to get people’s feedback and perspectives.

Somebody mentioned early on that the show reminded them of when they used to watch late night TV in the 80s and 90s, flicking between different programmes that were relegated to a strictly after midnight slot (as queer-themed shows usually were!). That idea had been something I was thinking about when I was making the show so I decided to bring that out even more by having all of the films fading in and out of static and also having interludes appearing in-between with news and interview clips relating to people’s opinions around homosexuality from different eras.

I’ve added new songs and sequences too with archive footage. It’s great to let the show naturally evolve between shows. I like to think of it as one ever-evolving mass of gay subconsciousness, haha!

When do you hope to release the album?

I’m just finishing off the album WOLF HOURS for release later this year. Half of the music in the show is from this new album and the other half are songs from my previous albums & EPs. I’ve released 2 of the songs as singles from the new album so far, with music videos featuring segments of the show. They are ‘Not Afraid’, which focuses on the daydreams of a high school football player with a crush on his teammate and ‘Hearts (We’ll Never Know)’, which is inspired by 70s/80s horror movies and tackles sexual repression.

What are your plans for WOLF HOURS in the future? Do you plan on touring?

Yes I’m hoping to tour around the UK. I’ve been contacting a few venues and festivals with the aim of putting something together for later in 2020 into early 2021, but we’ll see.

And getting the album out is a big priority this year. I also plan on releasing more of the films as standalone music videos with singles from the album over the course of this year.

Do you find it difficult as an independent artist to manage your own production, PR, bookings, etc.? How do you manage that alongside being creative?

It can be difficult yes.  I’m basically my own manager, producer, booking agent, distributor, PR machine and many more roles I’m sure!  That’s the reality of being an independent artist these days.  It can get frustrating sometimes because it leaves very little time to actually make music but at the same time it’s very liberating to be able to do all of these things without having to rely on record labels and other companies that either take a big cut or charge a hefty fee  I’m constantly switching between modes to get it all done.  Today I am in admin mode! (laughs)

You mentioned in a live stream that you have a backlog of songs (Not Afraid being 6 years old?) - how do you decide what to produce and what to leave on the shelf?

Yes I’m REALLY bad at finishing things. It’s a curse! I’m great at starting things though!  So I’m often working on songs and projects I started years ago, trying to get up to date.

It’s so hard to decide when a song is finished and ready to put out because you can guarantee that as soon as I release it, I’ll listen to it and curse myself for having the bass drum so low in the mix or not altering the melody in one place.  I drive myself mad! (laughs)

This WOLF HOURS album has been in the works for a good few years and is finally nearly done!  I think songs are more likely to get left on the shelf more permanently if they don’t fit with a particular album or project. For instance, this album is very much 80s synth-pop inspired so it doesn’t include more acoustic, folky songs for instance.

Over the last couple of years I’ve started releasing a lot of the songs from my archives as part of a subscription plan called ‘Secret Songs’ where people pay a monthly or yearly fee in exchange for a series of albums that I make by hand, featuring a lot of these leftover songs and cover versions.  It’s a really great way of sharing all of the songs that never made it onto albums in a direct and personal way. I include scrapbooks too with photos, lyrics and notes about all of the songs.

What new queer musician/band do you feel everyone should know about?There’s a guy called Runes, who is a Greek singer-songwriter based in Manchester. He makes beautiful, ambient, ethereal electro-pop and does all of his own amazing weird and wonderful designs too. He supported me on tour a couple of years ago and even designed the cover for my ‘Reconstruction’ EP.  He explores his sexuality and identity a lot in his songs. I’d definitely recommend him.

Definitely get the album out!  But also to continue to develop the live show and look at doing more show dates towards the end of the year.