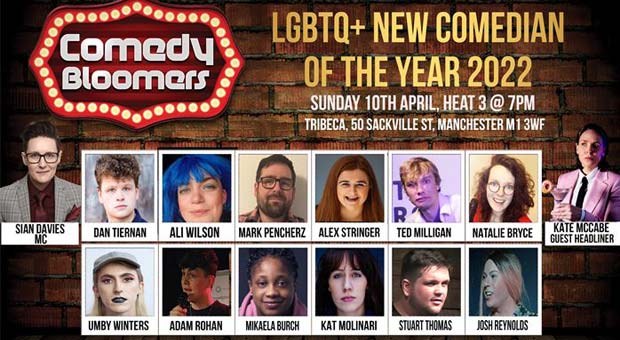 The largest LGBTQ+ comedy competition comes to Manchester in April with an amazing selection of new comedy voices vying to win the top prize.

The top prizefor the winner is their solo show filmed and streamed on Next Up Comedy, the home of the best stand-up comedy. Next Up Comedy will also film the competition final for screening.

Chris Smith founded Comedy Bloomers in 2017 having concluded that the LGBTQ+ comedy scene was under represented within both the LGBTQ+ scene and mainstream comedy.

“We are thrilled to finally be returning with LGBTQ+ New Comedian of the Year after a very challenging two years for our communities and beyond,” said Smith. “We are seeing a lot of new comedy talents on the circuit who will have the chance to compete for the prize - to get their own solo show professionally filmed and streamed on leading comedy platform Next Up Comedy. With a dazzling array of celebrity judges to be announced and an expanded range of venues and locations, we hope to make this year’s competition a landmark event in the LGBTQ+ Calendar.”

“Comedy Bloomers LGBTQ+ New Comedian of the Year was a great experience for me, a warm, fun, well run competition to be part of,” said George. “It was amazing to get live feedback from pro-comics and it has helped develop my confidence no end. It has definitely helped my career to gain more gigs on the circuit and I have been signed by Chambers Management since.”