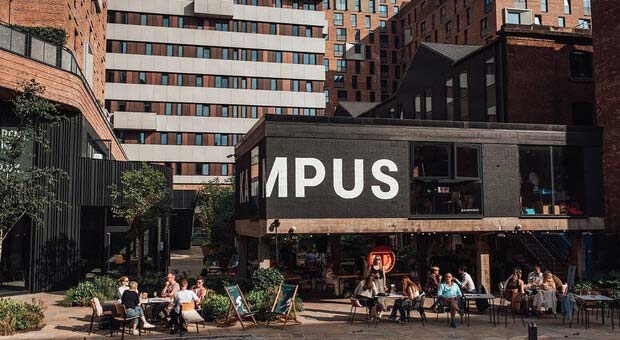 We are pleased to announce that TINE has been announced as our new partners in crime at Kampus where they will take over the Bungalow’s kitchen. Josh and James will offer an elevated casual dining experience, inspired by the best British and Irish ingredients. The set menu of five courses will be complemented by an extensive list of fine organic and natural wines, curated by ourselves and complemented by their own personal favourites.

They both met at Wolf at the Door where James was the Head chef behind the original concept. When it closed its door for a relaunch, they decide to take the opportunity to work on their own project: TINE, which means fire in Irish and the prongs or points of a fork in English, was born.

In February 2020 they take over the small kitchen at Ancoat’s wine bar and shop Blossom Street Social, with their residency cut short by Lockdown 1.0 and 2.0. As James puts it: ‘it was a great opportunity to experiment and share some of the recipes and ideas we had for TINE and the response has been fantastic. We have spent the past few months in the kitchen developing a new menu, and we cannot wait to introduce Tine 2.0 with Manchester’.

While they won’t describe their cuisine as Irish or British, this duality come through in their dishes, both as an inspiration and an homage to their personal background. As Josh explains, ‘we want to cook the very best ingredients from the Irish and British Isles. We work with incredible farmers and producers, and by focussing on hyper seasonal and local products we can bring their stories to the plate. This approach really gives purpose and meaning to everything we do’.

With about 20 years in a kitchen between them, they have worked in some of the most boundary-pushing restaurants in Manchester. Josh trained with Simon Rogan before joining Sam Buckley and open Where the Light Gets In, followed by a sous-chef position for the opening of Michelin-starred Mana. Manchester-born, James has worked for many years under the tutoring of Aiden Byrne at the regretted Manchester House before joining the Wolf at The Door team.

WE CAN ALSO ANNOUNCE THE OPENING THIS WEEKEND OF THE STACK BUILDING AT KAMPUS. BOOK A VIEWING HERE.