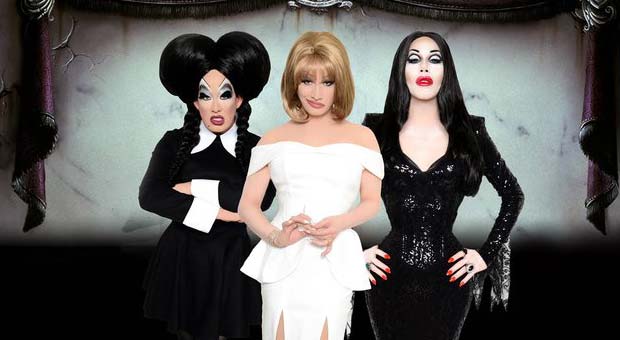 Jinkx Monsoon needs no introduction, since winning Season 5 of RuPaul’s Drag Race she has become an international star of the stage. We have been lucky enough to have many of her shows pass through our fair city and 2020 is no exception with not one but two exciting shows coming our way.

The first is Together Again, Again which sees Jinkx paired up with her musical partner in crime Major Scales for a look into the future.

Later in the year we will get the amazing Peaches Christ’s production Addams Apple Family Values starring Jinkx, Peaches, Bourgeois (of Bourgeois and Maurice) and of course, Sharon Needles.

Canal St’s Chris Park had a chat with Jinkx about these two new productions, what the creative process is like and why she’s decided the sober life is for her.

Let’s start with Together Again, Again – what can you tell me about the show?

It is set 45 years into the future, we are in our 80s and have reunited to do one last show before we die. There is song and chat in there. We are looking back on our careers but only as far back as 2020. It is a retrospective on things that haven’t happened. Major wrote a West End musical that no-one went to and Jinkx married Rupert Grint. We are really influenced by our work in the UK.

You’re back with Major Scales, how did you two meet?

We met in college, the Cornish College of Arts. Major specialised in original works and carved out his own musical career and I did musical theatre. We were the only two gay guys in school and bonded over our love of 20s fashion and culture.

We do a lot of the writing by ourselves, Major does the music and I do the writing. Then we go on an intensive writing retreat. We need each other in the room.

Peaches Christ is good friends with Patricia Quinn, Lady Stephens (Rocky Horror Picture Show) and I went for lunch with her. I was studying her and realised that was old Jinkx. She is nowhere near 80 but she has this grandeur and playfulness which inspired me.

So why the 45 year gap for Jinkx and Major?

We had this idea for years, Jinkx and Major coming together in their twilight years, it would probably happen in real life. So we thought we would make this dream come true and manifest our future.

Which is harder to learn spoken word or songs?

Spoken word is harder because I can’t do it alone. I can learn lines but I don’t learn how to perform it. I don’t know what the big jokes will be or what lines we will have to change. I need an audience for that.

We adjust things to the region we’re performing in. With the show Ginger Snapped, I didn’t have to change the style of humour but we find we have to make things more American because we write with a British sense of humour.

Moving to your next role, who is Debbie JeJinkxy (Jinkx’s character in Addams Apple Family Values)?

She is a hybrid of Jinkx Monsoon and Joan Cusack who is a fantastic actor. I think she is an underrated gay icon. I like to find things that are obscure and make them accessible.

Do you have the same creative input in Peaches’ shows too?

When we bring a show to the UK we co-produce so I have control of the show but the script is primarily Peaches. I want to focus on being an actor as for my shows I come up with everything. It is fun to turn the other parts of me off and just develop the character.

Are there any films you would love to parody that you haven’t yet?

We have talked of doing a parody of Too Wong Fu with me playing the Patrick Swayze role and Peaches playing Stockard Channing’s role, the abused housewife from a small town. We are lucky that we have mutual friends for other parts.

We would love to do a Matilda parody. I don’t know if it was big in the UK but it was all the rage for my generation.

We haven’t done TV shows but I would love to do an Absolutely Fabulous parody and I Love Lucy so maybe when we run out of movies we can do those.

How do you juggle so many different shows?

The only way I can say this is that I love performing. When you get into a groove with touring you can start to think about the next show. I will tour Together Again, Again for a month and then the shift goes to the Addams Apple Family Values.

The first half of a tour we focus on the show and build it up. By the end of a tour it is a different show because we introduce new things. I love this as I’m committed to giving a good show and I love to improvise.

Halfway through a tour things will ease off and I can focus on the next thing.

When does inspiration usually strike you?

It is random, you can’t force comedy. You can’t sit down and say “Today I’m going to write something funny”. I get together with friends and things come out when I’m not trying. I might say something that everyone cracks up at and I think “this is my next show”.

I saw on your Instagram that you have been sober for 9 months, that must be very difficult in the drag world.

It is very difficult in the drag world and this prevented me from doing it sooner. After a show it can be 11pm or midnight and the only way to unwind is to go to a bar. In the arts, performing arts and drag is it heavy in drinking so putting all three together is difficult. I had a moment when I realised that I was drinking two or three times more than a person of my age.

I can’t cut back, I don’t stop at one or two. I tried drinking less but one morning I woke up and realised it wasn’t working so the third option was to give up completely.

I am lucky that I have supportive friends and boyfriend. We met drinking but he is fully on board now.

Friendships can end because of someone giving up drinking so I am very fortunate. Nine months later I am really glad I made this decision. It has shaken the dust off my creativity and I have had to relearn the fun of drag without booze. It has revitalised me.

That said, my shows are written for a good time so I’m not encouraging my audiences to come sober.

You can see Jinkx in Together Again, Again and Addams Apple Family Values in May at HOME. For tickets please visit here