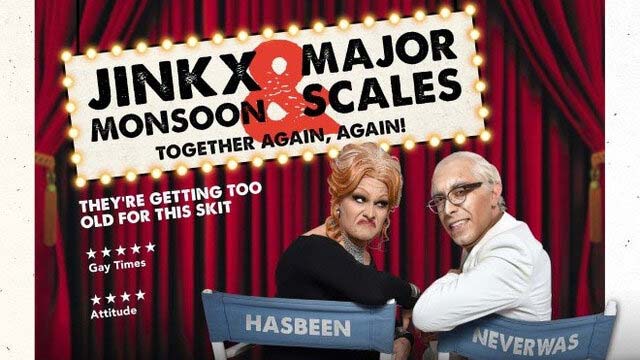 It’s been forty-five years since Jinkx Monsoon and Major Scales have set foot on stage together. The long-endured cabaret duo have long since gone their separate ways; Jinkx becoming a faded TV movie starlet, and Major fading into musical obscurity— each of them clinging onto what scraps of fame they still have.

Now, after decades of anticipation, the two of them have come together for one final reunion upon the stage. They’re together again, again!

The RuPaul’s Drag Race Star and musical prodigy Major Scales return to the UK with their most outrageously raucous show yet!

Jinkx Monsoon And Major Scales: Together Again, Again Fri 6 May - Sat 7 May 2022

‘Energetic, funny and filthy as f**k — this pair are perfect!’ – Gay Times

A drag queen at the artistic genius end of the spectrum of sassiness.’ ★★★★ – Attitude

Tickets are available via this link