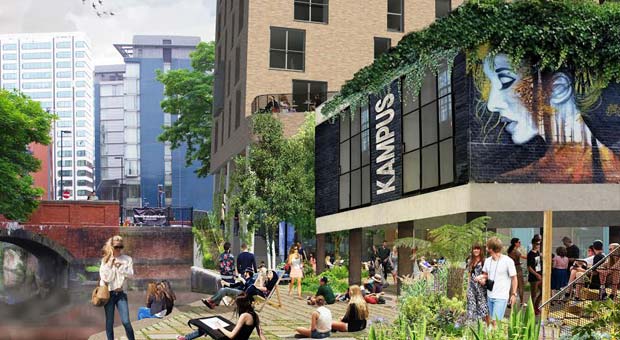 Locals are being asked for their ideas on what Manchester’s quirkiest new venue could be used for. The Bungalow – Manchester’s only venue on stilts – will be the first part of KAMPUS open to the public with a launch in the summer. A new image reveals how the developers behind KAMPUS – Henry Boot Developments and CAPITAL&CENTRIC – are planning to create a pop-up events and community space from the 1960s disused security cabin. A programme of events is being planned for the summer giving the first taste of what the £250m KAMPUS neighbourhood will have to offer. The salvaged brick and concrete box sits on stilts overlooking the Rochdale canal and will feature a vibrant, green roof and art adorning the walls. Being billed as KAMPUS’ version of the ‘village hall’ the building will be a space to meet and hang out.

Adam Brady, Henry Boot Developments said: “Manchester’s a city full of character and quirks and KAMPUS will reflect that. It’s the unusual stuff – the stuff that other people would have just pulled down – that gives KAMPUS its identity and will make it an exciting place for people to explore. We’re not trying to dictate how the place evolves, it’ll be defined by the curious stuff that we keep, by the people that call it home, and by the community in which it sits. “We’ve always loved the quirkiness of the Bungalow – can you name any other building in Manchester that’s on stilts? It’s our version of the village hall. One week it could be a pop up bar, the next it could be an art exhibition, with a mix of yoga classes and music events in between. We see it having a life of its own, with something different every week, so if you’ve got a great idea get in touch!”

The £250 million project, currently under construction at Aytoun Street, will transform the former Manchester Metropolitan University site into the city’s newest neighbourhood. Greenery will feature throughout, with the Bungalow adorned with planting and overlooking the central lush garden. Two floors of independent bars, restaurants and shops will frame the garden. KAMPUS will house 533 apartments in two new blocks, two heritage warehouses and the existing brutalist 60s tower. The new neighbourhood will also feature a second garden off Chorlton Street flanked by shops and cafes. The cobbled Little David Street will also be restored as a café-bar-lined alley, with outdoor seating.

Contractors have already been on site for over 2 years, with the project currently on track to complete in 2020.

Locals are being asked to submit their ideas for the Bungalow by emailing info@kampus-mcr.co.uk