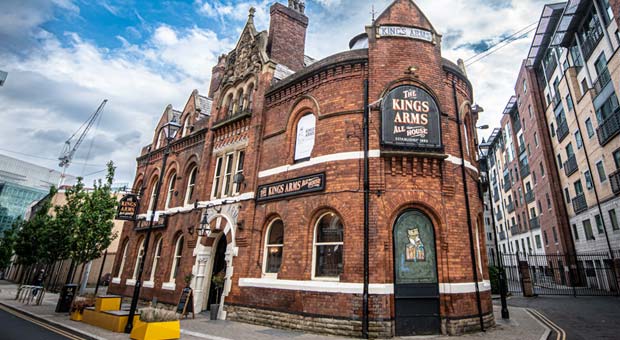 Iconic Salford pub The King’s Arms reopens its theatre in August with a series of themed live music Saturday Night Specials, after a massive refurbishment during lockdown.

The Bim Williams Quintet kick off the Saturday Night Specials with jazz on Saturday 7 August; folk with Irish band Quare Craic play on Saturday 14 August; there will be a funk and soul DJ on Saturday 21 August and jazz again on Saturday 28 August with the George Grundy Quartet.

The current red brick building opened in the 1870s, replacing an earlier King’s Arms pub built in 1807 on the opposite side of Bloom Street. Tables and chairs have been added to the domed theatre space upstairs to make it COVID safe and create a cabaret feel.

A vintage vinyl record player, discovered during a clearout of the vaults, has been added to Cee Cee’s gin bar, next to the theatre. Even the food is nostalgic, with chicken in a basket, complete with vegan alternatives, served in the interval.

At the other end of the landing, the office has been replaced by a new performance space named after Salford-born songwriter Roger Quigley, who died in August 2020, aged 51. Roger recorded as Quigley, At Swim Two Birds and was half of The Montgolfier Brothers with Mark Tranmer.

But there will still be drama. The College of Deviants Live on Monday 9 August is a free night of scratch theatre hosted by Cameron Jones and including performances from independent artists across the north, as well as Dapertutto Theatre.

Bernadette Szabo’s new play, Maybe It’s Life, 12-13 August, explores what death and the concept of afterlife may look like. Directed by Adam Cachia and starring Christopher Wollaton and Hannah MacDonald.

The Other Side, 26-27 August, is set in a dystopian reality where the world has split in two. Kahlo Theatre a multi-medium theatre company, formed by two graduates of the Manchester School of Theatre.

Both the theatre and the new Roger Quigley room will be performance spaces during Greater Manchester Fringe in September.

The pub, which has featured in the Good Beer Guide for 10 years and has six hand pumps serving cask ales from local breweries, has been a filming location for TV shows Fresh Meat and Cracker.

For more details and tickets visit via READ MORE