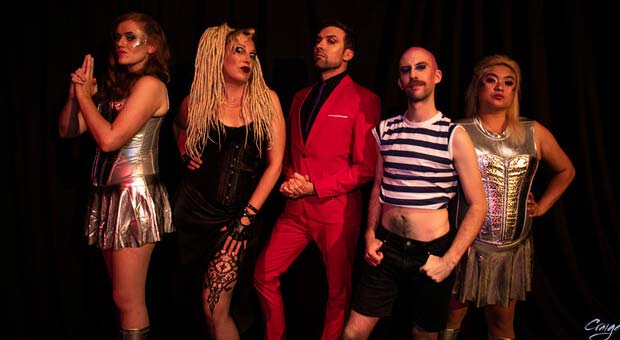 We are delighted to share this year's packed line up of productions.

There will be a world premiere of Bysmal Boys (22-24 September at Salford Arts Theatre)  a new play by Laura Genders, exploring the lives of Blue Watch, Macclesfield's fire service, during the Winter of Discontent in 1977.

A production of Three Way will be performing at The Empty Space (previously Footlights House) from 7-11 September.this production explores the world of Bi-sexuality.

I Remain (24-26 September at The Empty Space) is a one-act drama based on the true story of writer Parissa Zamanpour's great, great, grandfather, Private Harry Hayes of the Manchester Pals 17th Battalion of the First World War. The play follows Will, who stumbles across a box of old photos and letters, that bring Harry back to life through his words.

Dirty Old Town by Rob Johnston is drawn from historical records and personal memoirs, following Detective Jerome Caminada, believed to be the real-life inspiration for the Arthur Conan Doyle's fictional Sherlock Holmes. This play will be staged by Pact Productions at the Greater Manchester Police Museum 20-25 September. Directed by Malcom Raeburn, it is set in Victorian Manchester and stars Eddie Capli, who was recently in a Manchester detective series on Radio 4 called Stone.

New plays also include a farce, All Above Board, written by Nigel Planer (The Young Ones, Comic Strip Presents, Blackadder and Death in Paradise) on Monday 13 September at Salford Arts Theatre.

Comedy includes a double bill with Ben Moor (Spitting Image, Alan Partridge, Fist of Fun, IT Crowd, The Queen's Gambit) with Who Here's Lost and Joanna Neary (Ideal, Inbox - The Art of Now and Before the Room Next Door with Michael Spicer) with Wife on Earth on Friday 24 September at the King's Arms Theatre. Moor and Neary are also performing their parody of book singings in BookTalkBookTalkBook on Saturday 25 September at the International Anthony Burgess Foundation at 2pm.

Esther Manito's biographical show #NOTALLMEN on Thursday 9 September takes the audience back to 1990s lads mags and being told by the media that her Middle Eastern heritage was filled with misogynistic men, compared to Western fellas. Esther has appeared on ITV2's Stand Up Sketch Show, Russell Kane's Evil Genius on Radio 4 and co-presented BBC Radio 4 Newsjack.  Meanwhile Nathan Cassidy''s show Bumblebee on Saturday 25 September at Salford Arts Theatre is based on him confronting a burglar in his home in 2020, chasing him and talking to him. Both these shows are at Salford Arts Theatre.

Award-winning writer Selina Helliwell, from Bury, brings her one-woman show The Formidable Lizzie Boone to International Anthony Burgess Foundation 24-25 September, focusing on sexual abuse and mental health issues  with some dark humour and showcasing burlesque skills she learnt in lockdown. She is also showcasing Fruit Salad, which was meant to be performed in 2020, but is now one of GMF's online digital events.

Streaming some shows has online has also meant more international participation. Judas by Beejay Aubertin Clinton, the Critics' Choice for Best Original Script at Orlando Fringe, explores the story of Jesus Christ from the perspective of his betrayer and (spoiler alert) boyfriend, a story of sex, sacrifice and soulmates, 1-30 September.

Salfordian Mark E Smith, who later lived in Prestwich, is remembered in The Church of the Fall, a spoken word show by Stephen G Titley at Lock 91, September 23 and 28.

Feeling Haunted? on Sunday 19 September at Chapeltown Picture House is a multimedia show that focuses on a lost episode of a cancelled TV show of the same name, but are the cast now being haunted in real life? Meanwhile Failure Studies, 12-14 September at the King's Arms Theatre is Mario Biasioli's third play, inspired by his studies ay Manchester University.

Greater Manchester Fringe director Zena Barrie said: "So many people want to get out there and perform, we had more than 200 registrations. There have been some venue closures and some now have lower capacity. But our performers are very resourceful. People have performed fringe shows in all sorts of unusual spaces including pubs, campervans, tents, museums, a Roman fort and even a crypt. We even have a venue in Ellesmere Port, who wanted to take part."