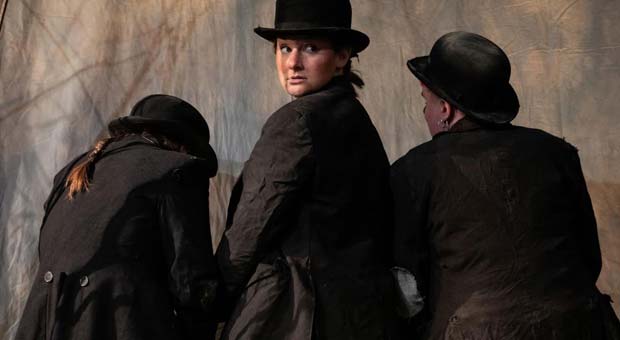 Godot is a Woman

In 1953 a man wrote a play about waiting

In 1988 he sued five women for trying to perform it

In 2001 Madonna released ‘What it feels like for a girl

Two people wait beneath a solitary tree on a country road - it’s a familiar scene, but this is not Waiting for Godot. Waiting for Godot was written by a man, for men and Silent Faces aren&#39;t men in fact they are gender diverse... So what are they waiting for? its time to dig it all up and start again.

Back with their trademark style of playful and political physical theatre, Godot is a Woman follows the critically acclaimed A Clown Show About Rain (“Delightful” Scotsman) and Follow Suit (“Marvellously comic and compelling” The Stage). Pleasance Associates Silent Faces are a female and non-binary led integrated company of disabled and non-disabled artists, whose work has been performed at the Pleasance London, Edinburgh Fringe, CamdenPeople’s Theatre, Latitude Festival, Wilderness Festival, Brighton Fringe and as part ofIncoming Festival at HOME Manchester and New Diorama.

We re excited to see Silent Faces take a swing at the patriarchy with Godot is a Woman.

The Beckett Estates refusal to allow women to do Waiting for Godot (and who even knows where they stand on gender non-conforming people) seems a relic of a bygone time anddeserves interrogation.  In their inimitable style, I have no doubt that Silent Faces; new show will not only rage but question, challenge and hopefully inspire us all!

More details are via HERE