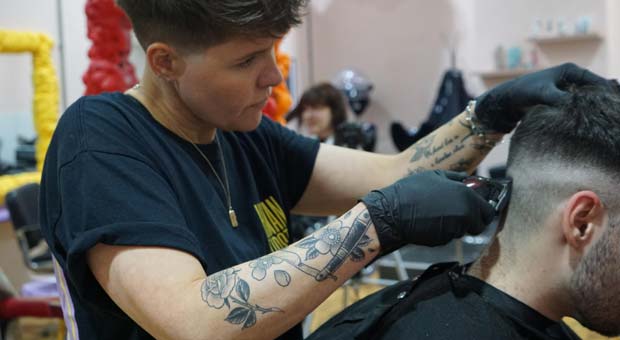 Keri Blue is a queer, non-binary barber from West London, currently based in Manchester.

Since coming out, Keri spent their life experiencing discrimination. After waiting in a barbershop in Brighton to get a short haircut, they were told they couldn’t have it done because they weren’t insured to do girls hair. Leaving the barbershop angry and humiliated, Keri decided at that moment to do something about it.

The saying goes, “if you want something done right, then do it yourself,” and Keri did just that. They enrolled at London School of Barbering and began to master their craft, putting in the graft at various barbershops throughout. Once qualified, Keri worked for names like Ruffians and Jonny’s Chop Shop, and was attracted to places that did things a little different. They continued development under Senyo at Homme XY to master afro hair barbering, before eventually settling in at Common Space.

It wasn’t until becoming a barber that Keri noticed the sheer level of discrimination surrounding gender identity within the hair and beauty industry. They began Hair Has No Gender during the throes of the pandemic in an attempt to eradicate this and the stigma that still comes with being trans.