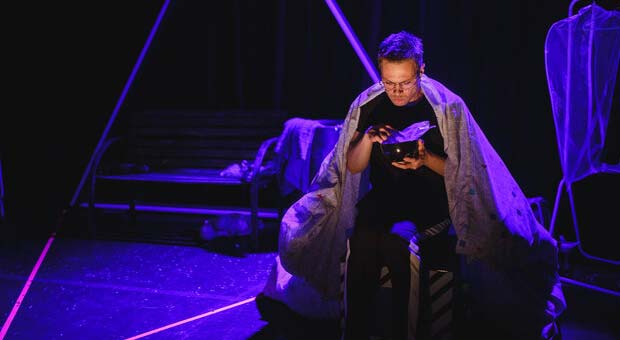 Award-winning Dibby Theatre have partnered up with HIV charity George House Trust to tackle HIV stigma and shame through the arts -  ahead of World Aids Day 1st December 2021.

In the lead up to this year’s World AIDS Day (1 Dec) Dibby Theatre presents an ambitious programme of creative activity aimed at eradicating HIV stigma in Greater Manchester and beyond.

The events are part of In Equal Parts, Dibby Theatre’s creative outreach programme that aims to educate, destigmatise and empower people to join the fight to eradicate HIV and HIV stigma and are aligned to the Mayor of Greater Manchester Andy Burnham’s pledge to end all new transmissions of HIV in the city region by 2030.

Highlights include (full listings below):

First Time – the award-winning show about Nathaniel’s personal story living with HIV is back in Manchester for the last time. This five night run at Contact, Manchester includes a World AIDS Day Performance (1 Dec) with special guest panel, and ACTUP+GetDown after show party (4 Dec) with DJ Mix-Stress and Supernature Disco.

Exploring the ups and downs of living with HIV since age 16, First Time is Nathaniel’s 'hilarious and heartbreaking' autobiographical solo show in which he shares his personal experiences of growing up gay and HIV+ in a straight and HIV- world. Diagnosed as HIV+ two weeks before his 17th birthday and after his first ever sexual experience, Nathaniel kept this a secret from his family for nearly 15 years. In 2017 aged 31, he had a breakdown, came out to his family as HIV+, and created this play with the award-winning Dibby Theatre to mark the 30th World AIDS Day in their hometown of Manchester.

In the three years since its World Premiere, First Time has toured across the UK and has been seen by over 3.3k people, including runs at the 2019 Edinburgh Festival Fringe and the 2020 VAULT Festival in London, winning multiple awards and receiving audience and critical acclaim in equal measure. Nathaniel’s activism in HIV continues long after the curtain comes down through his community-led creative outreach project In Equal Parts which has engaged over 60k people. His story has been seen by millions in broadcast media and print.

Nathaniel was also one of the undoubted breakout stars of Russell T Davies’ 2021  Channel 4 and HBO hit series about HIV It’s A Sin which has enjoyed global success. Playing Donald Basset, Nathaniel is notable as the only openly HIV+ member of the show’s cast.

“It’s A Sin placed HIV back onto the national conversation in a way not seen since the 1980’s and 90’s. But what you see in the programme is history. HIV healthcare and prevention has radically changed, but stigma forces many people living with HIV into lives of shame.

“This autumn, we’re proud to be teaming up with the North’s largest HIV charity, George House Trust, to tell new stories that challenge public perceptions of what life with HIV is like whilst educating people on the new science that will help us end HIV by 2030.”

First Time is written and performed by Nathaniel Hall, directed by Chris Hoyle and designed by Irene Jade. Supported by Arts Council England, from an original commission by Waterside Arts, delivered in partnership with George House Trust. The play is published by Nick Hern Books and is available in paperback: www.nathanieljhall.co.uk/shop

HIV+Me is directed by Nathaniel Hall and filmed and edited by Boca Films. Supported by Arts Council England, delivered in partnership with George House Trust.