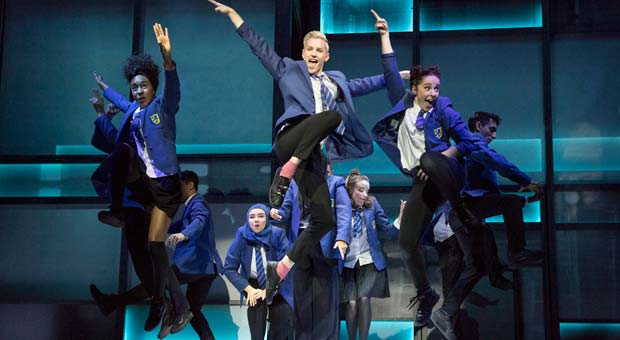 Everybody’s Talking About Jamie, the smash-hit and critically acclaimed feel good West End musical, is coming to The Lowry from Tuesday 21 July to Saturday 1 August 2020 as part of its UK tour.

Everybody’s Talking About Jamie opened at the Sheffield Crucible in 2017 and is currently playing at the Apollo Theatre in the West End. As well as receiving 5-star reviews, Everybody’s Talking About Jamie has won 8 major theatre awards, including the UK Theatre and WhatsOnStage Awards for Best New Musical and the Attitude Culture Award 2017, and was nominated for 5 Olivier Awards. Most recently the show won Best Original Cast Recording at the 2019 WhatsOnStage Awards.

Director Jonathan Butterell saw the Firecracker documentary film ‘Jamie: Drag Queen at 16’ the true story of Jamie Campbell and his mother, Margaret.  This inspired him to create this musical which is a dramatised portrayal of a period in Jamie’s life but is not a faithful account. Certain events and characters have been fictionalised.

Jamie New is sixteen and lives on a council estate in Sheffield.

Jamie doesn’t quite fit in.

Jamie is terrified about the future.

Jamie is going to be a sensation.

Supported by his brilliant loving mum and surrounded by his friends, Jamie overcomes prejudice, beats the bullies and steps out of the darkness, into the spotlight. With catchy songs by lead singer-songwriter of The Feeling, Dan Gillespie Sells, and book and lyrics by writer Tom MacRae, this funny, fabulous, feel-good, musical sensation has been wowing audiences and critics alike. Sixteen: the edge of possibility. Time to make your dreams come true.

Everybody’s Talking About Jamie was screened live from the Apollo Theatre into over 500 cinemas across the UK, Ireland and select European territories on Thursday 5 July 2018, it was screened in cinemas across the US, Canada and Australia in November 2018 and then there was an encore cinema screening across the UK on 29 January 2019. Everybody’s Talking About Jamie won the Event Cinema Campaign of the Year at the Screen Awards 2018. The official West End cast recording was released digitally worldwide and on CD in the UK last year.

Everybody’s Talking About Jamie is also to be made into a major film by Sheffield based production company Warp Films completing the fairy-tale journey from a 16-year-old approaching a documentary maker to hit West End Show and now the big screen.

Tickets go on sale to Members of The Lowry at 10am on Monday 10 June. General on sale is 10am on Friday 14th June.

Tix via link below