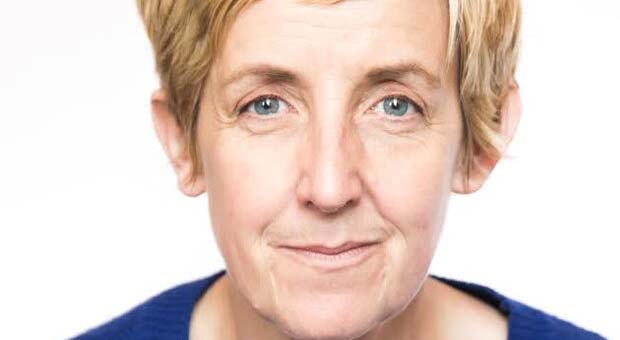 From Broadchurch to The A Word, Corrie to Cucumber, telly acting royalty Julie Hesmondhalgh has appeared in a range of acclaimed shows over the years. She has now returned to the stage touring one woman play, The Greatest Play In The History Of The World written by her husband Ian Kershaw.

DT: The Greatest Play In The History Of The World - that’s a pretty bold title to live up to isn’t it?

JH: It certainly is! Its a tiny yet massive love story about lonliness, isolation, fear and the universe…and slippers so its also very funny. The Voyager spacecraft, currently floating around the outer solar system, has a golden record aboard containing sounds, messages and images about the diversity of life and culture on Earth. It was created incase any intelligent extraterrestrial life forms stumble upon it. The play considers what we’d like to include on our own golden record we might leave behind.’

DT: It could have caused all manner of household huffs having your husband create something for you?

JH: True, but I just thought what’s the point of being married to a writer if he cant write something for me? So he went away and eventually presented me with this play, bless his heart. I think he was probably terrified I wouldn’t like it but its such a beautiful gift to be given. He usually plans and structures his work in advance but this piece he just sat and wrote. The first draft was pretty much what we ended up taking on the road. I think we’re at our best when we’re working on something together.

DT: You took it back on the road as soon as lockdown allowed. How has it been so far?

JH: It’s been so exciting and such an honour to be touring to all these regional venues. Being on stage is my happy place. I was really craving that shared live environment again and the audiences have also been hungry for it. The nerves never leave you though and every night just before I go on I always worry this might be the show that is my undoing!

DT: As well as returning to the stage, you’ve also been back on TV in the hit BBC drama The Pact?

JH: It was one of the first things made once restrictions allowed so we didn’t know how it was going to work. I’m thrilled to bits that its gone down a treat and people are loving it. We’re all over the moon that its such a hit.

DT: Its important to see another female led drama succeed. So often in thrillers its a woman who is the victim but that’s not the case in The Pact.

JH: Its a massive deal. People are starting to really look at the way sexual violence is portrayed on television, particularly the way the murder of women is used for entertainment. Its always a female character being pursued through the woods, viewed through the eye of the perpetrator. We call it ‘the blue tit on the slab shot’ as the victim is inevitably a dead female sex worker. Not to be woke about it but it is gratuitous violence and, if you’re a young person growing up and consuming that stuff as your entertainment, what is that telling you about the world? That this is now a normalised thing? The Pact has a group of really flawed women at its centre and there is a death but a woman is not the victim. Its also really well conceived - so many dramas go off the boil but this doesn’t go daft. Its full of twists and turns and totally believable.

DT: Leaving a TV institution such as Coronation Street after 16 years must have felt like a gamble but you’ve never really stopped.

JH: I’ve been so lucky and I never forget that. It was a matter of leaving the Street at the right moment and the fact that the storyliners gave Hayley a beautiful, long goodbye that made people look at me differently as an actor. Then I just made some good choices. If you have the good fortune to be able to be a bit patient, you can set out your stall in terms of the work you’re interested in doing. I didn’t panic and waited for interesting things to come up. It’s been such an adventure. After 16 years on the Street, it was like I’d just come out of drama school again. I don’t feel jaded or old school, I just go for it and do my best with this creaking old body!

DT: What’s next for you?

JH: I’m working with my husband on a new project that will be a reflection and memorial to the losses from covid. We’re trying to put names and stories behind the statistics because I feel we’ve all become a bit inured to the numbers. We’ve been here before with HIV and AIDS where it became this impersonal thing that, unless you’d experienced it yourself, felt a long, long way from you. We’re going to create a corner in the Royal Exchange where people can come and talk about their experiences and the people they’ve lost. Then we’ll create a live performance using some of the stories of what happened. We want it to be a gentle, beautiful, reflective thing where people can come and feel safe.

DT: Personally, I’m not planning to go from nought to sixty overnight just because a restriction date has passed. It seems clear that the emotional after effects of the past 18 months are going to be with us for some time to come.

JH: Very much so. As we re-open, I feel that it’s already gone a bit bonkers. It’s great people are celebrating being able to go out into the world again but many are still suffering terribly from long covid, from loss and also with the fear built up from being isolated for so long. I feel we need to be careful in this period just to keep people a little bit safe and be aware we’re all going to accommodate at different speeds. We need to be mindful of the way we talk about coming through it. The vaccination programme is fantastic but it doesn’t extinguish the horror that came before. People are still living and suffering with it and you have to have that in your mind. I have a friend who struggles terribly with long covid. We’re all coming at it from different angles and we need to be gentle with ourselves and with each other.

DT: Tell me about another of your recent projects Walk This Play?

JH: It’s an immersive audio piece that I did for Thick Skin Theatre called ‘Monuments’ by Jonnie Riordan. It’s a beautifully written play about the history of Ancoats before it was cool. You get to have me in your ear as you walk round the area!

The Greatest Play In The History Of The World is on tour, including Oldham Coliseum 24 - 26 June. www.coliseum.org.uk/shows/the-greatest-play-in-the-history-of-the-world-5201ap/

The Pact is available on BBC IPlayer www.thickskintheatre.co.uk/walkthisplay/

Credit for the production photo is Savannah Photographic