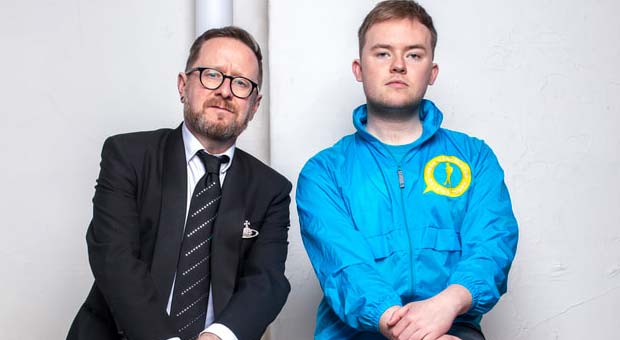 Who owns history? A Manchester Tour guide and leading expert on the lost language of Gay men discuss via a fast-paced theatre double-bill touring to the North of England this autumn.  See it from Thursday 16 September onwards!

Double-Ender is a fresh off the page double bill of monologues performed and written by Joshua Val Martin, (Bruntwood Prize, Royal Exchange Theatre), and Jez Dolan, (V&A and British Museum).

The fast-paced show is touring this autumn: Manchester, Oldham, Bury and Huddersfield.

Double-Ender shares personal, candid, and sometimes laugh-out-loud stories, about Queer people – past and present – living, learning, and loving in a rapidly changing Manchester.

Joshua Val Martin is a real-life tour guide - in-between writing for stage and TV – and through his company, Free Manchester Walking Tours, he guides locals and tourists around the city he’s made his home. He shares stories of his uniquely diverse audience ranging from the Uruguayan rugby team, and Noel Gallagher, to customers for the city’s various fetish nights. Joshua experiences the dark underbelly of tour guide turf wars which leave him pondering who, ultimately, has more right to tell the story of a city…

Polari was the subversive and lost language of Queer men spoken in the gay pubs and secret spaces of yesteryear. The coded language was once heard in TV and radio comedy and hid a then illegal homosexual subculture in plain sight with some audiences ‘in the know and in on the joke’ and others not having the faintest clue. By the end of Jez’s gallop through the history of Polari, audiences will have learned their actual Polari; it’s bona to vada your dolly old eek!

Audiences will leave the theatre with a far wider and cheekier vocabulary than the one they went in with…  That’s a promise.