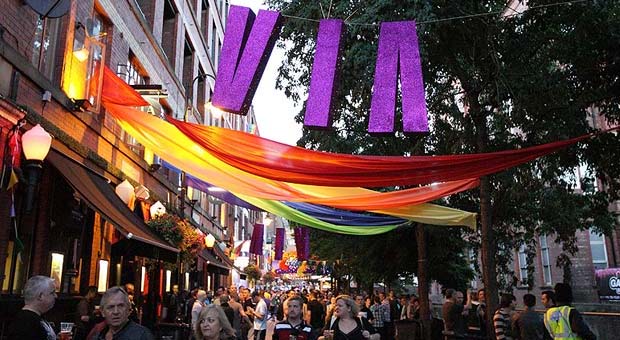 For many years Manchester has pulled many of the LGBT community to its famous gay village situated around Canal Street. Manchester is home to one of the most vibrant and probably largest gay scenes not just in the UK but most of Europe. Even back in the 1960’s when having sex with another man was still illegal, Canal Street still saw groups of men gather to partake in sexual activity. Canal Street was a haven not just for gay men but female prostitutes who, should the police nip through, pretend to be together so they could avoid legal issues for their ‘crimes’.

As time went on Canal Street and the surrounding area saw gay venues begin to open including New York, New York and the Rembrandt to name just a few. These venues would launch what today is widely know and recognised as Manchester Gay Pride. Furthermore, the gay village and Sacksville garden became the heart for those who would come to be impacted by HIV/AIDS in the late 1980, early 1990’s. it also became an area of protest against Margaret Thatcher’s cruel Section 28 which forbid the ‘promotion’ of homosexuality.  Regardless of what was happening around it and in wider society the Gay Village of Manchester has endured and taken on a wonderful vibrant life of its own, but could all that be about to change?

There is now a real concern that Manchester’s gay scene is to go the same way as London. The London gay scene has become a victim of gentrification with huge numbers of gay venues closing their doors for good. Since 2000 over 150 gay venues have shut their doors with many being sold to become high end apartments or some forced to closed due to skyrocketing rental costs and business rates making the venues no longer viable.

We have seen huge numbers of apartments springing all over the city and the same is true of the areas surrounding the gay village. It has been known for some time that View which closed around 2 years ago is to become a hotel and we have also become aware that Manchester City Council have given the green light for two of the gay scenes most popular venues, The Thompson Arms and Arnero Indian restaurant to be knocked down to make away for yet more apartment space. It also common knowledge that the building that houses Kiki and the LGBT Foundation is owned by Urban Splash, a huge private development company….

Some might argue that the development of the gay village is exactly what is needed, the gay scene has unfortunately become rife with easily accessible drugs, crime and aggressive bouncers. It is to be hoped with the opening of new restaurants such as No 1 Canal Street and Marco’s English Chop House that the Village might re-establish itself as I am still very much of the opinion that the gay village is needed. What the gay village needs to do is evolve, bulldozing it is not the answer but a kick up the backside is possibly what is needed to make it more relevant. Cheap drinks might be good for the student and those below the age of 35 but at that point has the gay scene lost its purpose?

We’ve got to a point of acceptance now where gay and lesbian people are accepted and can quite safely move out into the North Quarter and Spinningfields quite safely and have a fantastic night. Gay rights have not just become an aspect of legislative law but also the public conscious and gay people can mostly walk the streets of our wonderful city quite free of homophobia. It cannot be understated that Manchester City Centre is not the entire world, gay and lesbian people are still likely to face persecution in other parts of Greater Manchester and we have not even touched on the still ongoing issues of biphobia and the terrible increase in transphobia up and down the country. In 2016/17 there were over 9000 reported hate crimes based on sexual orientation so to say that I would still argue the need for LGBT safe spaces are essential.

In my mind the gay village represents that safe space and is still that place we gather for Pride or to commemorate terrible events such as we did when the Pulse shooting happened. If development is going to happen it should be to the benefit of the gay village and ensure that the fabulous history that it has is not forgotten. I would ask that we as a community support our venues, our local drag queens and ask that the venues update themselves and become relevant to 2018 and beyond. What that should look like I don’t necessarily know but I do know I want my gay village to be exactly that, not another cold block of soulless apartments with no life or character.