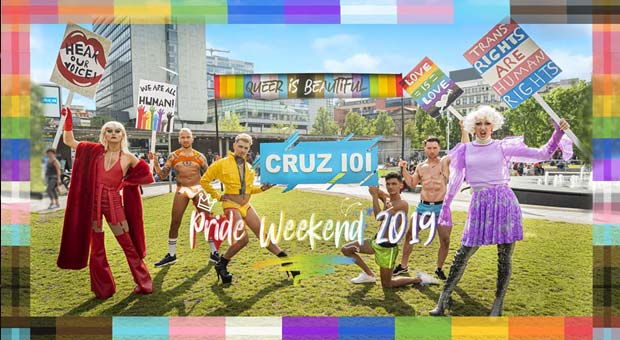 This year with the increase in homophobic attacks our theme is PRIDE RIOT! To celebrate all things LGBTQ+ & show that we will stick together!

As in previous years, they have frozen their drinks prices, Including our £6.50 Premium Doubles Offer.

They will offer 2 Floors of the hottest (and gayest) dance music at Cruz 101 - Commercial Vibes on the main floor whilst downstairs dj's play Underground Vocal House at the legendary Club Aftershock!

Then things get even better! 9 Hours of the freshest Dance, Chart & RnB from Gaydio's top DJs - Kriss Herbert & Craig Law! Don't be late for this one - 3 hours of B2B DJing provide banger after banger! The best place to start your Pride Weekend! ??

+ Hosting & Dancing will be our Unicorn Club Kid Peter Belina!

You saw Gals Aloud, now who's ready to Spice it up? The hilarious, full drag show pays homage to the fab 5 in the most fabulous and funny way! Feat. Meth as Posh, Donna Trump as Ginger, Kitty Scott Claus as Baby, Ophelia Love as Sporty & Cara Melle as Scary!

Queens, Queens, Queens. It's the House of Skreams! Serving Trashy Pop Sultriness Tilly & Yassica Skreams will be werqing that stage!

If you're not at Cruz on Pride Sunday then are you even doing Pride?  Not 1, but 2 of the countries very best DJs Liam Chaplin DJ & Sam Londt turn up the party to exxxtra! ?

Queens, Queens, Queens. Tilly Skreams will be back with more show stopping Drag Performances! More performers to be announced.

Think Pride is over? Not a chance! Cruz 101 will give you one last party & the closing dance of a fantastic & memorable Manchester Pride 2019 as we showcase 2 of the Village's most talented up & coming DJs - DJSmith & ITK! Expect everything Camp, Cheese, Commercial, R&B - you request it, we'll play it!

+ A special act to be announced.

TICKETS AVAILABLE via link below

Want to save money? Search "Cruz 101" on your App Store now & save £££ + exclusive App only offers just for you

To Reserve one of our VIP Booths please e-mail Bookings@Cruz101.com or Inbox us for more details