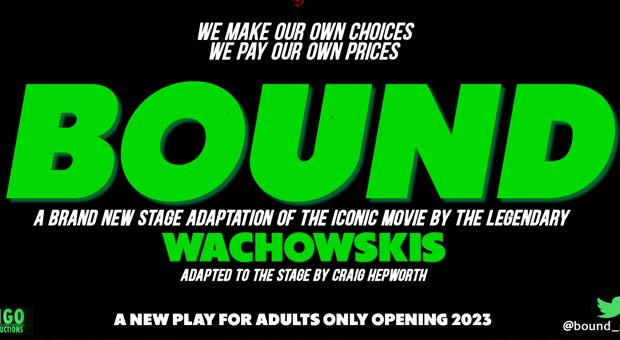 Manchester, UK based Vertigo Theatre Productions have announced that they have been given permission to present a limited try out production of a new stage adaptation of the iconic film BOUND. The movie written by the legendary Wachowski sisters (The Matrix Movies, V for Vendetta, Cloud Atlas, Sesnse8) will be adapted to the stage by Vertigo's in house writer/director Craig Hepworth and will receive a workshop reading this November.

Released in 1996, BOUND became an immediate critic favourite due to it's beautifully crafted script, stunning direction and boundary pushing lesbian representation. To this day, Bound is the Wachowskis most critically acclaimed piece of work and is frequently voted as one of the best lesbian movies of all time. It starred Oscar nominated Jennifer Tilly (Bullets over Broadway, Chucky, Liar Liar, Monsters Inc.) Gina Gershon (Face Off, Showgirls, Riverdale, Killer Joe) and Joe Pantoliano (Memento, The Matrix, Sense8).

Sparks fly when Violet sets eyes on Corky in the hallway of her building. Violet is the girlfriend of a violent gangster, Caesar, while Corky is fresh out of prison and doing renovations on the apartment next door. As the two women launch into a passionate love affair, they assemble an intricate plan for Violet to escape from Caesar, with two million dollars of the mob's money. All they have to do is trust each other to make it out alive.

The new stage adaptation is set to premiere in the UK in late 2023 with venue and dates to be announced later.

Vertigo will be setting up a crowd funding campaign to raise £25.000 to help bring BOUND to the stage. This will launch in the next few weeks. 'We are a small company' says Hepworth 'and we have landed this opportunity after pitching to the original writers. It is a dream to be able to do this, something I have wanted to bring to the stage for the past 16 years. However, we need to reach out to theatre lovers, fans of the movie and members of our fellow LGBTQ+ community to help us raise the money to bring this work to the stage. I think this could be something truly special'