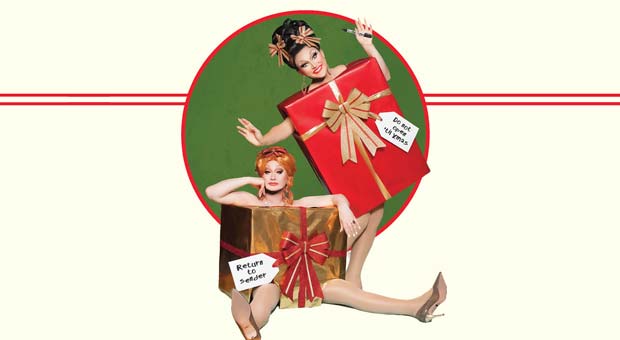 After last year’s wildly successful “To Jesus, Thanks for Everything” these two Ru Paul Drag Race favourite queens - BenDeLaCreme and Jinkx  Monsoon - return to the stage this holiday  season in high spirits. Join them for one night only at the Palace Theatre, Manchester on Sunday 1 December 2019 for an unforgettable evening  of sugar, spice and all things DIVA - the first stop on their UK tour.

DeLa is the sugar and Jinkx is the spice – but how do these two all America gals deal with the stress of the holiday season? A little song, a lot of eggnog, and theatres full of people looking at them… Yup – all they want for Christmas is attention!

About BenDeLaCreme: Sweet as pie and sharp as cheddar, the Terminally Delightful BenDeLaCreme is best known as Miss Congeniality from Season 6 of RuPaul’s Drag Race, as well as the multi-record breaking powerhouse of All Stars 3. She has performed throughout the world, premiered four critically acclaimed solo shows Off-Broadway, and has written, directed, and produced a myriad of narrative and variety spectaculars that have played to sold out audiences for over a decade. All I Want for Christmas is Attention marks DeLa’s first producer credit for an international tour.

Since winning Season 5 of RuPaul’s Drag Race, she has toured the world performing her original cabaret shows with her music partner, Major Scales. The duo have also released two albums: The Inevitable Album & The Ginger Snapped.

All I Want for Christmas is Attention! presented by Contact Theatre, Soho Theatre and ATG runs at The Palace Theatre, Manchester on Sunday 1 December 2019 at 7.30pm

Ticket information via the link below