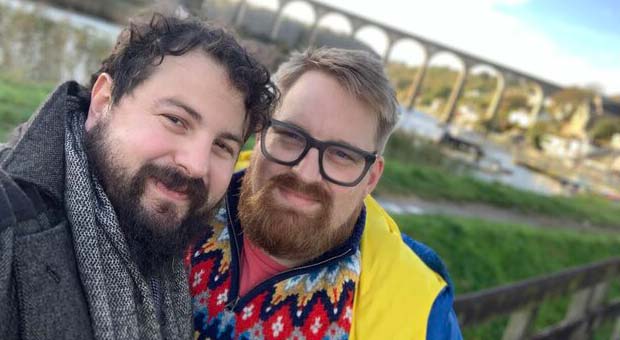 A same-name couple from Warwickshire have released a new comedy podcast which explores the cultural quirks of their respective homelands – the UK and Argentina.

As two larger gay males – known as bears – both looking back on their life experiences to date, the podcast’s title, ‘Bear Back’, seems apt.

The UK is represented by Ben Goodwin, 36, who grew up in York, before moving to Birmingham aged 18. Meanwhile, Ben ‘Benja’ Porcel, 38, was born in the Argentine city of Rosario, located 185 miles northwest of the capital, Buenos Aires.

Episode one launched recently in March March and explores national stereotypes, focusing specifically on how Argentina is perceived in Britain and vice-versa.

This was followed  when Benja attempts the Life in the UK Test as part of his efforts to secure British citizenship.

Over the next six weeks, the duo will discuss everything from LGBTQ culture, food and drink, citizenship, language and public transport – via The Cheeky Girls and the history of the ballpoint pen – all why they navigate their life together in the UK.

“Although we haven’t argued much during lockdown, we found that we quarrelled a lot about silly little things. It became clear that our opinions on everything from cuisine to politics were formed from the two diverse cultures we come from and which have shaped us as individuals.”

Environmental engineer Benja moved to the UK for work in 2014 and has lived with communications manager Ben in Rugby, Warwickshire since 2019.

“With a lot of spare time on our hands during lockdown, we decided to bottle our lively debates into a podcast to share with others and determine which culture is better! It’s all very light-hearted and, as well as giving people an insight into what it’s like to live as a transnational couple, we really just want to make people laugh.”

‘Bear Back’ episodes will launch weekly on Friday at 00.01 GMT across all major podcast platforms and on Acast: Click READ MORE  for information.