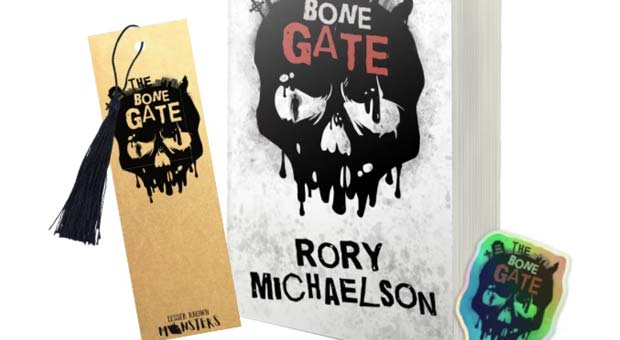 The Bone Gate by Rory Michaelson

The Bone Gate is an action-packed emotional roller coaster of a book, and a phenomenal follow-up and sequel to Lesser Known Monsters. All in all, Rory Michaelson’s storytelling shines in The Bone Gate. Continuing to follow the main character, Oscar, we get a taste for what the world has been like since he and his friends saved the world and closed the world parallax. Like Lesser Known Monsters, The Bone Gate takes us deeper into the imaginative and unique world Michaelson has created. Riveting action, tender and wholesome moments, hilarious dialogue, and loads of big bads dominate the landscape and propel the story forward…but outside of that, the connection between the characters, the directions their lives are taking, and the overarching stakes of saving the world blend all of that into the perfect book. If you liked Lesser Known Monsters, it will be impossible for you not to fall in love with The Bone Gate.

There are a host of new characters to love in this second instalment. Ranging from hilarious, sexy, and sweet to snarky and dubious, there is little not to like with the new cast. Introductions of characters such as Betty Blumpkin, a cheeky drag queen/awesome monster and blasts from the past for Oscar, Zara, and Dmitri, make every scene unputdownable. Michaelson’s twists on traditional monster folklore continue to make each character one-of-a-kind, which lends not only a unique viewpoint to their world, but a fun connection to the recognizable menagerie of creatures and cryptids they pepper in. Of course, the story wouldn’t be complete without the tried and true stars of the Lesser Known Monsters series: Oscar, Zara, Marcus, and Dmitri. As someone who fell instantly in love with all of them, I was pleased to see their character arcs continue in such a strong way. Michaelson was able to keep their stories interwoven while still allowing us insight into who they are as individuals. We get a closer look at Zara and Marcus, which I will never complain about, and we are treated to some of Dmitri’s history as well. If anything, each character’s growth throughout The Bone Gate leaves me even more eager to get to the third and final instalment in the trilogy.

As was the case with Lesser Known Monsters, Michaelson has created a fantastic world filled with fabulously queer characters, pop-culture references, and dark and silly humour. For those that read Lesser Known Monsters, you know that there were very few cases of queerphobia, making the story more about the characters and their adventures without bigotry becoming a force to be reckoned with (on top of already being responsible for ending/saving the world). In The Bone Gate, however, queerphobia is touched upon heavily with the main antagonist and woven into the story in a purposeful way, making it seen as the affront it should be. I appreciated that the bigotry was reserved for a reason and meant as a main driver in the hatred spewed forth by the Big Bad™. It is used in such a way that while there are many unsavoury characters we come across, none but the true evil and most hateful character possesses any queerphobia or bigotry. That stark comparison makes it clear that Michaelson’s world continues to be an accepting one, and not one focused on those nasty aspects of life that we often see focused on in queer books.

Not only is that aspect brilliantly handled, every other aspect of queer life in The Bone Gate is addressed just as well. We follow Marcus, who addresses their transness; Zara, who is overworked and looking for a woman she can turn to to take away the bite of loneliness she feels; and Oscar who is trying his best to build a relationship while also trying to gain confidence and agency. Michaelson speaks beautifully to a multi-dimensional queer experience and life without overstepping into identities or digging too deeply into backgrounds, but instead, lets the reader have a glimpse of each character and their hopes, dreams, and fears. It allows us to become more connected to their characters while still wanting to know more and, as always, protect them with everything we have.

If you’re like me and are a fan of Lesser Known Monsters, you will no doubt be taken on a wild journey of awe, laughter, and a whirlwind of emotion. Michaelson seemed to take everything I loved about the first book and doubled (sometimes tripled) down on it. As can be expected, the humour is bar-none and I laughed out loud the entire way through. Michaelson excels with dialogue and continues to pull at my heartstrings with the found family dynamics, not to mention the hopelessly romantic dialogue from Dmitri as he continues to uphold his old world charm. The new characters possess all of the above and more, making you root for them even when you shouldn’t. I will not lie when I say I cried my eyes out through the last chapter, though the reason will have to remain secret as to avoid spoilers. Just make sure you bring tissues.

Overall, The Bone Gate is a beyond stellar follow-up and a testament to Rory Michaelson’s skill and creativity. I am sad that there will only be one more instalment in this series because I could stay in this world forever.

More information and to buy here