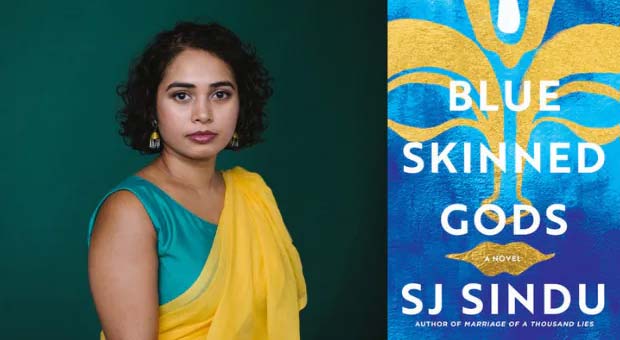 Blue Skinned Gods is an immediately drawn and vivid tale of Kalki, a boy born with blue skin believed to be the reincarnation of Hindu god Vishnu. Raised in an Ashram by his controlling Ayya (Tamil for father), loving but often withdrawn Amma (Tamil for mother) and his aunt, uncle and cousin, Kalki navigates rural India as a child god.

Scepticism surrounding the authenticity of Kalki’s godhood is introduced early on as the opening sections introduce the reader to an older Kalki, living in Toronto. Predominantly, though, the novel follows chronologically through his life into adulthood. These parts are so powerfully written that you are immersed completely into younger Kalki’s world, finding yourself believing, as he does, in his godliness, until certain events begin to unravel it.

Kalki has close relationships with his cousin Lakshman, Roopa, a girl he healed, and a young ‘thirunangai’ called Kalyani (Tamil for a trans feminine person). Ultimately, all of these relationships are lost to him in varying ways and it is this poignancy of loss that carries the novel. The writing is at its most beautiful when capturing these intricate human emotions, ‘My worldview had been blown of precious glass, and Lakshman had come along and smashed it with a hammer.’ Away from everything he once knew and mounting pressures, these losses are central to Kalki’s psyche as he attempts to embrace freedom.

But though all these different versions of love felt distinct for me, the loss of them felt exactly the same--- Lakshman’s natpu, Roopa’s kadhal, Amma’s anbu. The grief at losing each one occupied the same space in my heart.

Something in particular I loved about this novel was its depiction of queerness. The way queerness is written, is a refreshing telling of it, as an extension of human experience, rather than positioning it as an oppressive identity. This is not to say that the realities of transphobia and homophobia are not acknowledged within the novel, however. it is Kalki’s Ayya who prevents him from having a relationship with Kalyani and it is his father’s voice he hears when he is having his first gay sexual experience. Despite this, gender is seen as something unfixed and diverse sexualities are seen as a given, something everyone should explore, which for young, queer readers is extremely affirming.

Lakshman leaned close and whispered in my ear. “You’re free now. Try everything at least once.”

This was my first time reading SJ Sindu and I really enjoyed it; I will definitely be reading more of their work in the future for its excellent drawing of human emotions and vivid settings. It is always refreshing to read gender diverse people as full characters, who aren’t there just to diversify a novel but have rich inner worlds all of their own.

A note on content: there is an abusive and controlling father and husband, suicide, violence, transphobic and homophobic attitudes and self-harm.

Blue Skinned Gods was published by Legend Press on the 2nd of November and can be ordered from Queer Lit here: