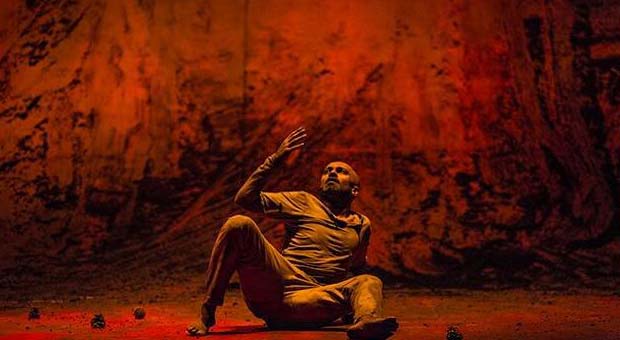 Xenos at The Lowry

Xenos, a reworking of the story of Prometheus, arrived at the Lowry for its first performance (of 2) on September 29th, and for just over an hour it had me spellbound. It was created and danced by Akram Khan, with a score for 5 musicians/singers by Vicenzo Lamagna.

The performance starts as soon as the auditorium opens, where we find ourselves at an Indian wedding. After about 15 minutes the performance starts in earnest with Khan entering as a Kathak dancer, who, we find, was a soldier in WW1. The wedding setting morphs into his time fighting, and we hear that this isn’t war, it’s the end of the world.

The rhythm of the dance is replaced by the staccato of gunshots, and the music built so much that my ribs were vibrating. As it reached a crescendo the set melted away apocalyptically to be replaced by trenches with a searchlight, and Khan reappears as the soldier being sniped at.

The set morphs again into its final configuration and the dance slows down as the soldier becomes more and more exhausted, battered and bruised, with excerpts from the Mozart Requiem.

After the lights faded and the music died down it seemed necessary to preserve the silence before giving a very well deserved applause with standing ovation.

Khan’s dancing is superb, at times almost Dervish, at others extremely tender, and synchronised with split second timing to the music. These solo performances will unfortunately be his last.

The musicians were all excellent, and at times the score put me in mind of Gavin Bryars: at some times hauntingly beautiful, at others apocalyptic.

There is only one more performance (on September 30th) but this link https://www.youtube.com/watch?v=WdubLS-4_zg&ab_channel=AkramKhanCompany provides the background of how Xenos came into being.