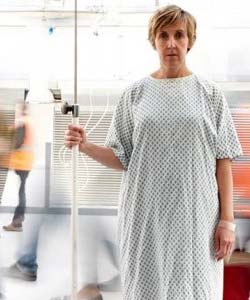 WIT at the Royal Exchange

Pulitzer-prize winning WIT is a striking and sharply funny reflection on the frailty of existence and the complex relationship between knowledge and love. The Royal Exchange welcomes back Julie Hesmondhalgh who plays Vivian Bearing in director Raz Shaw's return to the theatre.

'Margaret Edison’s Wit is an unflinching look at the effects of cancer on an Academic, Dr Vivian Bearing (played with genuine chutzpah by Julie Hesmondhalgh) and it pulls no punches, yet manages to make you laugh at every turn.

Vivian Bearing is going to die; we know this from the very beginning, because she tells us so. Facing the facts head on, our feisty protagonist offers us a refreshing look at how people treat you, the language they use to address you and how, all of a sudden – they forget what makes you tick, or why you get up out of bed every day. You are now a number, a box to be ticked; a silent patient.

This is best explored when her Doctor, keeps asking: “How are you feeling today?” Her answer is irrelevant, as he is so busy analysing her charts, or prodding her, that her stock response of “Good” is barely acknowledged or responded to.

Parts of Wit are difficult to watch, as we see and hear the symptoms take hold, this is Stage 4 cancer and not a Beaches or Terms of Endearment version of events. Vivian is waiting....and the constant pain she feels is enlivened by the things we take for granted; a nurse calling her sweetheart, the soothing feel of an ice lolly on the throat or a visitor holding her hand.

Jenny Platt has a small but vital part as a nurse called Susie. She sees Vivian as a human being and constantly talks to her, not at her. One scene whereby she massages her arm is quietly beautiful and enough to get the audience welling up. Platt imbues humanity in a world of charts, deadlines and poor bedside manners. It would be great to see her again at the Exchange in a much bigger role, as she does a great deal with a little, here.

Esh Alladi’s Doctor may lack empathy but the actor gives him much more than a stereotypical M.D, and conveys the comedy that comes from the darkest of situations. Lastly, Julie Legrand, fresh from her success alongside Imelda Swinton in Gypsy – is touching in one of the final scenes, which highlights the importance of friendship.

This is Julie Hesmondhalgh's show though and she grabs the role by the scruff of the neck and shakes it, and as a result she is a revelation as the stoic and at times, confrontational – Vivian, as she shows us the layers that lie beneath; the frustration, the joy, the heartache and the sheer defiance in the statement “Why me?” Vivian is reduced to a woman who did 'stuff' to while away the hours, as we are all biding our time and this gifted actress captures this with ease. She will win many awards for this performance, as she does get right under the skin of the character and it is refreshingly unsentimental.

Raz Shaw’s direction covers inch of the round space, as Vivian spins round and round, looking for answers. She doesn’t find them but the audience discover a gem of a play with a remarkable performance and proof yet again, why Manchester’s theatre scene is thriving'.

Wit is at the Royal Exchange Theatre until 13 February.

For full details and to book.