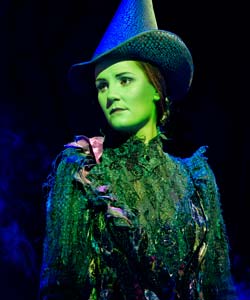 Wicked lands at The Lowry

Nature or nurture? Are we born good or evil? These are the central issues of the bewitching musical Wicked, which has landed at The Lowry Salford, after playing a sold out eight-week run last year in Manchester.

The shows storyline tells the “alternative story” of the 2 witches of Oz and of how all those famous Baum characters ended up in the Emerald City to meet the Wizard.

As we took our seats there was a genuine buzz of anticipation often associated with opening nights.

Indeed the presence of press photographers,snapping invited guests on the 'Green carpet'set the scene for the night ahead.

The highly stylised stage curtain and the enormous Dragons Head above it,also stamped the visual aspect of the award winning production,right from the off.

From curtain up the story of the relationship between good witch Glinda,very Green Wicked witch of the West, Elphaba and their joint love interest Fiyero begins its theatrical journey.

And theatrical it certainly is...

Visually stunning throughout,the production is dominated by wonderful,eye catching staging which somehow manage to cleverly combine the mystical worlds of Oz and Hogwarts.

Intriguing lighting too by designer Kenneth Posner,complemented a fantastic,ingenious set by Eugene Lee.Both are vital aspects of the production.

Additionally,the combination of spine chilling sound by Tony Meola with the famous acoustic of the Lowry Theatre really hit home.

Some great performances too by leads Ashleigh Gray as Elphaba and Emily Tierney as Glinda,with Sam Edwards providing all the camp and swagger of a Disney Prince as the misunderstood Fiyero.

Great support too from Steven Pinder as The Wizard and Marilyn Cutts as the machiavellian Madame Morrible.

Outstanding work too from a very strong ensemble,who were rarely off stage.

Whilst personally i have never felt that this musical had any stand alone numbers,i was undoubtedly in the minority as an appreciative audience loved every minute of the performance and the standing ovation was both spontaneous and genuine.

The show runs until July 25th.