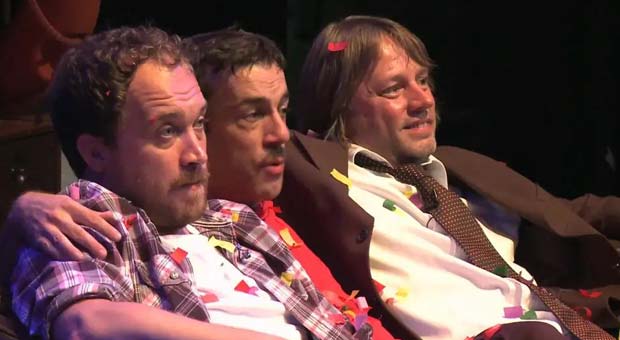 What I Heard About The World

What I Heard About The World, co-created by Third Angel and Portuguese theatre company Mala Voadora, is a thought-provoking if not narratively flawed series of incredible stories that were searched for and workshopped all around the world during an extensive research period.

Strung together as a criss-crossing journey around the globe, these stories are sometimes humorous - like how a zoo in Gaza painted two donkeys to resemble zebras in 2009 - and often poignant. The one that stuck with me most was the story of an Israeli radio station that actively broadcasts silence until there is an emergency.

Many of these stories may seem like mere urban myths to some, but in fact everything presented was told first-hand to the company during their research period and verified where possible. But What I Heard About The World does play with our perception of stories, and how fact can turn into ‘urban myth’, or vice versa - any story is twisted in its retelling, so even the truth can be subjective. In this age of unverified facts online and misinformation in the media, this is extremely relevant.

If there is a lesson to be learned here, it is our duty to reflect on the world, to strive to understand the nuances of humanity more. After all, the invention of the internet made the world smaller than ever, so why do we all feel further apart? Performers Chris Thorpe, Jorge Andrade and Alexander Kelly - who are neither playing characters nor necessarily expressing their own personal viewpoints - aren’t just telling stories here; like impressionist painters, they add human perspectives - hence ‘What I Heard’.

Though most of the stories are interesting and engaging, the piece’s obvious weakness is in the transitions between scenes, which feel forced and adversely affect the narrative flow. The stories themselves aren’t linked thematically, and there is no obvious order, geographical or otherwise (though portrayed as a trip around the world, they definitely do not take the most efficient route); instead the dramatic structure feels abstract bordering on arbitrary. Personally, I think such a great premise would work much better as a short web series.

In terms of direction, What I Heard About The World is a staple of modern theatre, mixing elements of performance art and live music with a very Brechtian practice, the culmination of which comes when Thorpe tries to drink a litre of salt water or when Andrade tells a story to the (British) audience in Portugeuse. Although many work well to dramatise the anecdotes, some of these attempts to subvert classic theatre feel forced, almost clichéd themselves, while also distracting from the personal nature of the stories. Yet however awkward and unrefined What I Heard About The World may be, its immediacy and intensity mean I could not avert my eyes for a moment.

This piece is actually set in a living room, presumably shared by the three ‘characters’. Yet from that living room they explore the world, at least in spirit. Each of us are currently in very similar positions - though we may be stuck at home during this unusual time, we have more opportunities than ever to open our curtains to the wider world. With that in mind, I think What I Heard About The World is the perfect place to start; everyone can take something away from it.