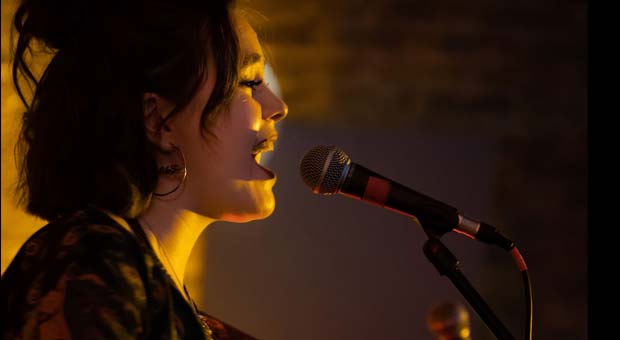 We need to talk at Anthony Burgess Foundation

We Need to Talk – a Jazz Cabaret is performed by Jas Nisic, and tells of being dumped via words and standard classic songs in a sort of sonata format. Set 1 (the exposition) is about getting together, Set 2 (the development) is being dumped and Set 3 (the recapitulation)  is the coping. The change of outfit for each one reflects the moods.

The songs are powerfully sung, and the acoustic of the IABF’s performance space was excellent. All but one of the songs was originally made famous by a woman (or a person with a cervix – the exception being I can’t help falling in love by Elvis who I think didn’t have one) and the words have been subtly altered (or in some cases added to) to make them gender neutral – for example “Ain’t no sunshine when they’re gone”. That’s fair enough in these progressive times as, as the programme notes say, love is shared between people regardless of race, gender, religion or sexual orientation. It does jarr slightly though – which is probably the intention.

As would be expected, the middle set is a bit darker than the others and a few torch songs are included. At times Jas launched into scatt singing, which left a few people confused as they looked like they thought she’d gone mad. All in all though it’s a very enjoyable evening with only a couple of slightly rough edges that rather fitted.

Jas is ably accompanied by Dave Cavendish on Anthony Burgess’s Bösendorfer grand piano. The fugue sections in the Nina Simone numbers were simply perfect and the bonding, as it were, between Jas and he was great.

There’s a second bite of the cherry tonight (20th July).