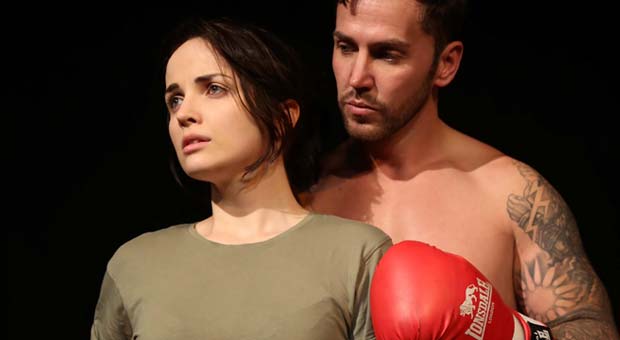 Unbreakable is a Manchester Fringe event at the Kings Arms in Salford. It’s a superb second play by Danny Clifford, in which he also takes the lead, and draws heavily on his own life and experiences. It shines a spotlight on a side of life that most people know exists, but from which they would rather remain in ignorance.

This is a text book lesson in how less is more. There is no scenery, and the only props are 3 folding chairs. With these we can very easily imagine a night club, a flat, a house, a doctor’s surgery etc. It’s that well done. We start with Josh (Danny Clifford), a part time boxer, and Kath (Eve Gordon) his partner in their new place, scratching a living and where a brought in pizza is a luxury item.

The other characters are John (Matt Seber), Josh’s father, with whom he has an uneasy relationship, Sarah (Natalie Jones) Eve’s best and possibly only friend, Frank (David Ambler) Josh’s boss and trainer, Dave (Dru Jones) the local drug baron and Patrick J Maxwell (as himself) Josh’s opponent in the match that takes place towards the end of the play

It isn’t long before we see that the reason Josh and Sue are only just making things work financially is because of the drugs that Eve becomes more and more addicted to as the play progresses. The acting here really does come from the heart and can only stem from Danny having seen things first hand. John is very convincingly portrayed as a football crazed toper, Sarah is the unfortunate victim of her own weaknesses and drags Eve down with her, Dave’s part is so well executed that it’s hard to think Dru hasn’t been the nasty piece of work he’s acting in real life. Similar comments can be made about Frank, as the insights into sparring are amazing. Patrick isn’t on stage for long – just the duration of his bout with Josh, but, being a real life boxer, brings in realism.

Unbreakable charts the downward spiral of addiction and how it’s not just the immediate addict who is affected, but those around them too. Eve’s eventual rescue and recovery from drugs and prostitution is terrible to watch, but had us all on the edge of our seats, and the standing ovation from a packed main theatre was both spontaneous and deserved.

The play  continues at the Kings Arms until July 13th.