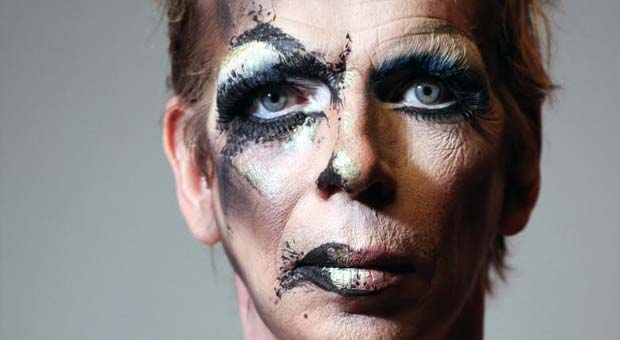 TURN ON FEST: AN AUDIENCE WITH DAVID HOYLE

Turn on Fest: An Audience with David Hoyle was hosted by Hope Mill Theatre on January 22nd, in which the man himself was interviewed about his life before taking questions from an understandably packed house. Sadly, it was a one night only event.

Seated on colour coordinated sofas, David and his inquisitor Greg took us through growing up in Blackpool and working in British Home Stores’ food hall there, to ending up in Longsight at the tender age of 58. It seemed much longer than the allotted 45 minutes, as so much was crammed in, and the tales, trials and tribulations that came out provided glimpses into a seemingly complicated person, but also to someone who is at one with themselves. After the interview the floor was thrown open to questions from the audience. Fittingly, these were as varied as the people who posed them.

The anecdotes of cutting exactly 2oz of cheese, or cutting exactly 4oz of honey roast ham had us laughing from the start, as did his tale of Mrs Partington who’d been told that BHS had been bought by Fortnum and Masons so David would be her personal food shopper from now on. His ideas about Socialism extended even then to turning a blind eye to shoplifting, and if he was on the till – this being the age before bar codes and scanning – a few items would go through uncharged if he thought someone needed a helping hand.

David gained his Equity card from performing in Blackpool’s working men’s clubs – when working men actually had work. One of his acts was pretending to be the love child of the Duke of Edinburgh and Dorothy Squires. This was in the late 70’s and early 80’s when Conservative Blackpool was on the up and up, and the big names (like Tommy Steele) were fêted. New comers such as The Beatles didn’t do well at all. In such an atmosphere the lure of pastures new couldn’t be resisted, and London beckoned – where, with a mischievous glint in his eye, Mrs Thatcher’s housing benefit came to the rescue.

This was the start of the AIDS crisis, and David, like many, lost a lot of friends in his 20’s when you’d normally only be going through that in your late 60’s and 70’s. Other measures such as Section 28 were also coming into force. Somehow he turned round what life threw at him, and slowly but surely his star was in the ascendant. Performances at the Royal Vauxhall Tavern and other venues followed, and somewhere along the way he added painting to his accomplishments, which was brilliantly confirmed on stage. This provided another anecdote as he had no brown paint with him and a question from the audience asking if he’d ever painted in “brown” was rewarded by a scatological tale of painting in that medium in Berlin, after it had been freshly provided on stage.

David now lives in Longsight, telling us that he shares his flat with some rats who live in the kitchen, and to whom he defers by knocking on the door before entering. It would be fun having him as a neighbour. His Socialism is against any form of honorifics, although, with another mischievous glint in his eye, he might just accept one to upset people.

The billing for the evening describes him as an avant-guardian. That sums him up nicely, but underneath there is a very warm heart beating, and if you ‘avant seen him yet, March will find him at HOME, and perhaps a word with the appropriate government department (https://www.gov.uk/honours/nominate-someone-in-the-uk) is called for – just to see what happens…..

David will be at HOME on March 28th: https://homemcr.org/event/open-door-tour-with-david-hoyle/ and some of his paintings are on display here