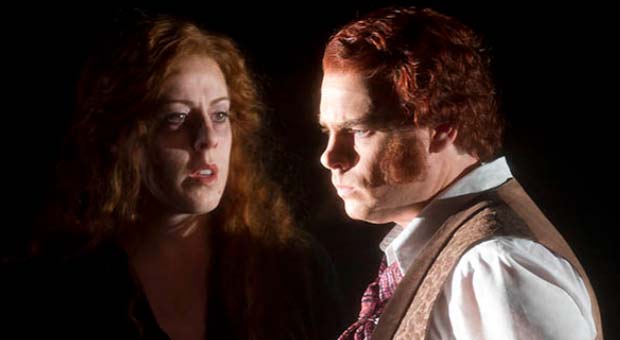 Turn of the screw

Britten | The Turn of the Screw | The Lowry, Salford

Billed as “a terrifying, edge-of-your-seat thriller”, last night (Wednesday) saw Opera North bring Benjamin Britten’s opera, The Turn of the Screw, to The Lowry Theatre, Salford. I am not sure it lived up to this billing, but certainly as Nicholas Watts informed us by singing the prologue, this is “a curious story” indeed.

Based on the ghost story by Henry James, Britten’s psychological thriller of a chamber opera reaches new levels of supernatural uncertainty in Alessandro Talevi’s revival production. Set in the bedroom of a remote country house, a newly-appointed governess fights to protect two children from menacing spirits. But are these apparitions real, or the product of her troubled imagination? And what terrible evil occurred before the governess’s arrival?

The themes found within The Turn of the Screw – innocence, abuse and corruption– had a particular fascination for Britten, and he clothes this dark material in music of disturbing beauty that winds up the tension to breaking point and ultimately tragedy.

Sarah Tubman (The Governess) and Heather Ship (Mrs Grouse) dominant the singing with such strong performances. Tubman particularly shows some outstanding singing and I am sure a wonderful career awaits 11-year-old Tim Gasiorek (Miles) as this is a solid Opera North debut from him. Projection was a little disappointing from Gasiorek at times as it was with Jennifer Clark (Flora). But none the less these were excellent performances.

With the use of changing scenery, projection and elements of puppetry and mime, Talevi alongside set and costume designer Madeleine Boyd have created something extremely creative. The set is astonishing, and you really do feel isolated and uncertain in the bedroom with these characters. In fact, the use of set helps the audience ask the questions into what is real, and what is not?

Unlike Mozart, Britten is never going to be an immense crowd pleaser. Indeed, this production of Britten’s opera is challenging at times, but the orchestra, led by Leo McFall, is very effective at bringing to the forefront this musically rich score and shows why Britten deserves his treasured honours of being one of Britain’s greatest composers. The musical painting that can be found within this production is certainly something of beauty and brings a level of tension, intimacy and uniqueness that you absolutely expect from this tale.

The Turn of The Screw was at The Lowry for one night only. But if you missed it, this opera was the first for Opera North that was live-streamed on the opera vision platform, where it is subsequently hosted and available until 21.08.2020 at 12.00 CET. Hop over to www.operavision.eu.