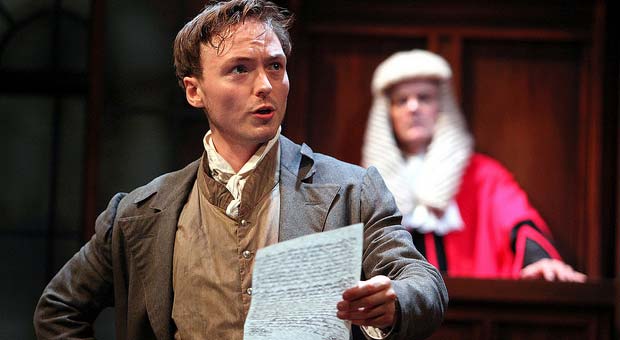 The press is undermining the key pillars of society – religion, politics and the monarchy. Freedom of speech is being challenged and one publisher is up in court on a charge of libel against the Tory government and the monarch in waiting with his wife/mistress. This could be a news headline from today’s world, however Trial by Laughter looks at a case that took place over 200 years ago. In December 1817, William Hone (bookseller, publisher and satirist) was summoned to court three times in three days for publishing what were deemed libellous materials harmful to public morals. Hone makes a decision to defend himself and bases his defence on humour and making the jury laugh.

Authors Ian Hislop and Nick Newman bring this true story to life in a fascinating, fast-paced production that opens the debate – is laughter treason? Joseph Prowen is energetically excellent as Hone, nimble of foot and mind, in a non-stop, almost maniacal determination to prove his innocence. He is equally matched by Peter Losasso as right-hand man and illustrator George Cruickshank. (Local historians may recognise the names of Hone and Cruikshank from their Political House that Jack Built pamphlet that defined the radical response to the Peterloo massacre).

A projected clock face cleverly conveys the passing of time, ticking slowly in real-time; a sudden fast-forward burst to the next moment; hurtling backwards to a pre-trial scenario. Steve Mayo’s sound design deserves special mention in creating the courtroom atmosphere and really making the audience feel part of the expectant crowd.

Thanks to Hislop and Newman, William Hone is no longer the forgotten hero of free speech. His actions marked a turning point in the fight for British press freedom; a fight he won three times in 1817; a fight that resonates with society 200 years later. A fascinatingly inspiring evening of learning and laughter.