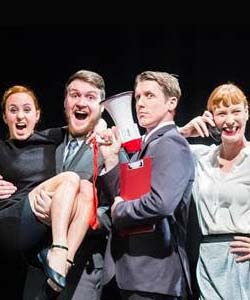 On maybe the only dry day of November (you know the one- when your hair wasn't a damp soggy mess before you even got into work), we abandoned our essay deadlines and headed to the thea-tah.  The lovely lads at Canal Street invited us to check out 'Happy Hour' at the Lowry so we headed out to see the first of their two performances in Manchester as part of their national tour.
And, just like when you get those unexpected, post-work, two-for-one cocktails, it was proper bloody brilliant.
The Tmesis Theatre's show was inspired by the director, Elinor Randle's, fascination with the "happiness industry" and the sixty minute performance was a physical, improv-filled explosion of goofs and dance and stapler abuse related fisticuffs and manic smiles and lots and lots of laughs. Seriously. Haven't laughed that hard since Becca had to be put in an ice bath having nearly hospitalised herself making penne (long story. Another day, another disaster etc).
The incredible energy and physicality of the actors was as impressive as it was baffling- all the laughing was enough to have me knackered. These guys just never stopped. Even after an over-enthusiastic push of a rolly-box landed one actor on his back, there was no losing steam, no breaks in character and they managed to make a brilliant skit even better.
I'd love to tell you all my favourite bits (of which there are many), all the jokes, all the hilarious sequences - but let's not ruin the magic. Go and see it tomorrow night at The Lowry before it continues the rest of its tour, and have a whale of a time. This show absolutely deserves to do well and we're guessing it will do.
And afterwards, you could, like us, head to Dockyard across the bridge and get the plum porter.  Or better yet, get ten.  They are a delight.
By Kate Keating for Canal St Online.