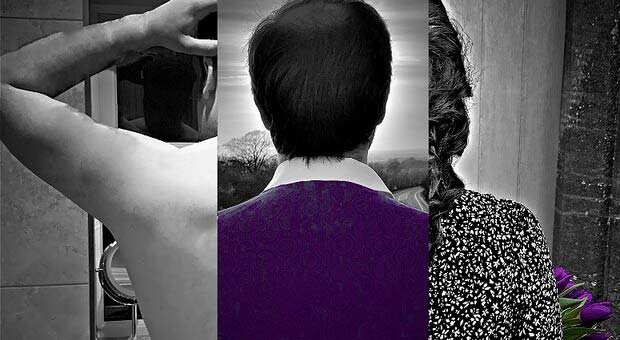 Three Way is described as exploring some of the many misconceptions about bisexual men, the stereotypes around promiscuity, bi-erasure, and trust. In short, can someone who is bisexual be trusted in a monogamous relationship?

But at the heart of this production, is an exploration of relationships as a whole – with their partners, with their family, with themselves.

The production from Midlands based Split Infinitive is raw and intimate, something only emphasised by the nature of the venue, The Empty Space (formerly Footlights House in Media City). The audience is very close to the stage, so it almost feels like a conversation rather than a performance.. The production features a collection of three monologues: two from the viewpoint of bisexual men, Michael and Guy, and one from Clara, the daughter of a bisexual father. Delightfully base at points, its blunt dialogue is handled well – layering together these three very different experiences.

There’s a real exploration of love and relationships.  All three struggle with elements of identity (their own and that of their loved ones), love and sex. The men offer self-reflective stories, from their very different experiences, one’s perhaps with a more positive future than the other. Guy’s story is the most explicit, but as mentioned, this is done in such a way that it’s not a gimmick or detraction. It’s open and honest.  Whilst Clara’s experience is more mixed – dealing with the sudden change of a family dynamic and her own understanding of her relationship with her father. In part it’s her exposure to her father being ‘human’ which struck a chord with myself and my date for the evening. It’s something every child experiences at some point in their lives.

Whilst it does feel that there is more to explore with Guy – the other two stories having a more definite end (in Clara’s case a new beginning), his story is the most light-hearted, adding balance to the other two.

Overall, this is a wonderfully accessible piece, well written, and well paced. Expect the 60 minutes to disappear in moments as you are drawn into the lives of these three characters