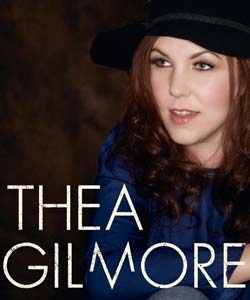 Thea Eve Gilmore is a British female singer-songwriter who visited Manchester recently and we were there. Her is what we thought..

'Jo Rose, a Manchester based singer opened the gig with a well crafted set of songs on guitar and piano, though suffering from a sleepless night in Edinburgh! Jo Reminded me of a younger Loudon Wainwright or Neil Young.

The fine concert hall of Manchester’s RNCM (“a bit posh here” she remarked) was host to the wonderful Thea Gilmore and her band, on the 10th night of a 13 gig tour. Looking poised and business like in a slinky red dress, she belted into “Copper”, the opening track on the new album “Ghosts and Graffiti”.

To get an audience singing along on an opening number was some going, but a lot of fans were here in the well filled auditorium, even on Eurovision night! She sang with poise and confidence, with side-kick husband/producer Nigel Stonier by her side and a superb band behind, drums, bass, piano, accordion, cello, violin and Robbie McIntosh playing a mean electric, doubling on 5-string banjo.

Great sound in the hall, strings and acoustic guitars particularly good. Thea played her Martin D28 acoustic on a good few songs, while Nigel often switched from his Martin to piano, a fine player. A good few familiar songs here, with her solo “Sol Invictus” spine tingling. Eldest son Egan (8) came on to play 3rd violin on “London” near the end, which was a great family moment too.

With 3 encores, including “Summertime” and “Juliet”, this appropriately ended a great night'.

For more about forthcoming shows at RNCM.