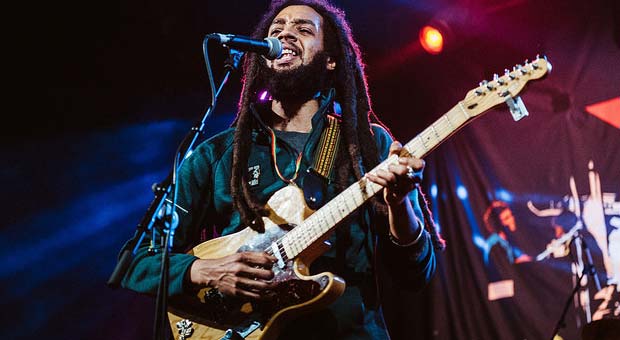 The Wailers at Manchester Academy

The Wailers at Manchester Academy

The Wailers proudly carry the massive legacy of their most famous founding member Bob Marley. As they brought their iconic Reggae sound to the Manchester Academy they brought some much-needed heat with them, dispelling the chilly “beast from the east” that had caused temperatures in Manchester to drop into the negatives that week. The passing of Bob Marley and various other members of The Wailers, such as Peter Tosh, did not stop the current line up from performing the album “Legend” with an incredible vigour and spirit that they managed to imbue into the audience. Everyone was showing symptoms indicative of extreme joyfulness – huge smiles, big laughs and the most varied dancing ever witnessed at a gig in the academy.

It was a shame that the initial sound didn’t do the band justice. A booming bass drum and more subdued bass guitar initially sounded more like rock band set ups, but after a few prompts from the band to the sound crew the issue was resolved. The audience seemed oblivious to this as classics such as Buffalo Solider and Three Little Birds had them singing loud enough to rival the band’s sound. The 8-piece group all had their own way of encouraging the audience to sing and dance. Be it in the form of epic vocal solos from the two back-up singers, beautiful off-beat focused guitar or the general jumping and dancing of the band members on stage. All in all it made sure the audience had no choice but to jump and dance their night away.

A single giant banner based on the Rastafari flag and the light show were the only visuals used and the only ones needed. There was so much going on from a musical perspective that any more visual effects would have drawn you away from that electric, sunny soundscape.

There is an immense pressure performing on the legacy of one of the world’s most famous bands, but the assembled musicians basked in it. There was no pressure, no stressors, just a natural chemistry and groove that made it clear this legacy is not expiring anytime soon.  The history and influence of The Wailers drew a varied crowd of ages, cultures and backgrounds. Situations where many different people are congregate may end in tears elsewhere, but the atmosphere in the academy was one of love and kindness as the band cast a spell with their sweet, sweet reggae music that pushed the freezing weather away and brought the people together.