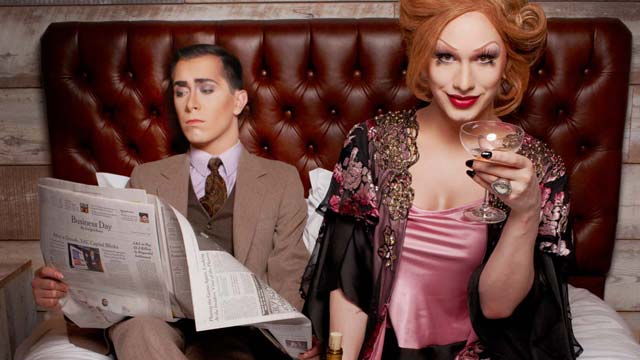 I’ve been a lucky lad this autumn because it’s been Monsoon season for me. Not only did I get to interview the chanteuse earlier this year at the rehearsals for the excellent Hocum Pokum but I saw her at the show as well as at Heels of Hell in October. So I was excited to see the next phase in Jinkx Monsoon’s world domination.

The Vaudevillians has been a massive success all over the world and loosely follows the storyline of two Vaudeville performers, Kitty Witless (Monsoon) and Dr Dan Von Dandy (Major Scales) who are frozen in time due to a freak snow accident whilst touring Antarctica. But thanks to global warming they have returned to the world to find that all their songs have been stolen and they are looking to reclaim them.

It sounds like a good premise and there are some really joyous moments in this show. The reworking of Madonna’s Music being one of them (“Hey Mr Conductor, put a record on) and Take Another Piece of My Heart.

But for me the joke started to lose impact as the show went on, we could have done with more variety. Some of the monologues did seem a little indulgent with a long speech about Marie Curie and then launching into Britney’s Toxic and the finale was an ode to Ibsen’s A Doll’s House with a reworking of I Will Survive which left the audience slightly bemused.

I would have been tempted to throw a few original numbers in there to break up the constant reworkings, maybe in a Bourgeois and Maurice style, about the state of the nation they find after 100 years away.

Major Scales, Monsoon’s partner in crime, is excellent and his solo of Let Me Clear My Throat was so good, Charleston Hip Hop, who’d a thought it?

One thing that is brilliant about this show is it lets Jinkx show her complete vocal range which is so wonderful and she will always be a great stage presence no matter what she does but some elements, such as morphing into different voices just felt beneath someone of her talents.

If you’re a Jinkx fan like me, I would recommend going to this because she never disappoints but I didn’t leave with the feel good factor I have from other productions and I wait with baited breath to see what the Monsoon brings next.