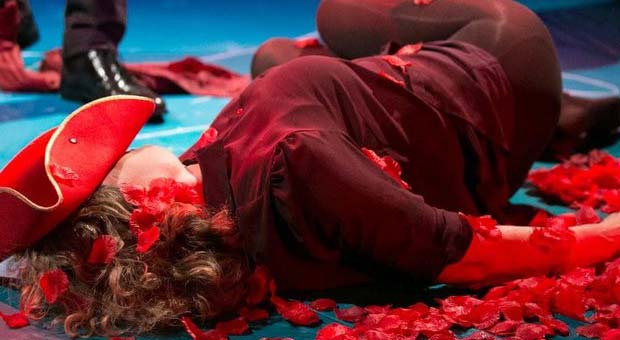 Gate Theatre’s The Unknown Island is an almost verbatim adaptation of Portuguese Nobel Prize winner José Saramago’s 1997 short story, by director Ellen McDougall and dramaturg Clare Slater. It is a humorous contemporary fable about a man’s daunting search for himself, the moral being: that which is truly missing from our lives is often much closer than we expect.

The protagonist, known only as ‘the man’, makes a request of the king: he wants a boat, so he can set sail in search of an unknown island. The man is met by cynicism on all sides - there are no unknown islands left to discover! - but he holds firm in the belief that the very nature of the unknown suggests such an island is out there somewhere.

The man’s unwavering certainty inspires the castle’s cleaning woman to leave her thankless job - something she couldn't find the courage to do until now - and she follows him both figuratively and literally into adventure. Their roles quickly reverse, as the man begins to question whether his ambitions are too far out of his reach, while the cleaning woman exercises a newfound strength by getting the boat, and the man, in seaworthy condition.

This first half or so of the piece is more like a simple oration of the text rather than a true theatrical performance, with the performers spreading out and filling the space without much urgency; but the text itself is never simple, exploring such themes as bureaucracy, class and identity in an enlightening and refreshing way.

The second part of the narrative detracts from the story that has been set up so far by entering the world of dreams, and therefore representational desires, as the man sleeps off the food and wine he earlier shares with the increasingly alluring cleaning woman (and the performers share with the audience, and offer to the camera, during a short intermission). This conclusion is much more visually and emotionally engaging yet less intellectually fulfilling than the build up to it, as the political overtones are exchanged for more personal themes.

The supposed ‘unknown island’ is a clear representation of the man’s longing, as well as a reference to the unpredictability of life in general. In fact, the island’s existence is comparable to Schrödinger's cat: it is both there and not there, ever-shifting around the planet like the flying island Laputa in Gulliver’s Travels. It is a moving target, and therefore the ideal aspiration for a man who doesn’t know what he’s aiming for in any aspect of his life.

The original text, Saramago’s “The Tale of The Unknown Island”, is a gripping and original tale which shares a similar philosophical style and sardonic tone with Antoine de Saint-Exupéry’s The Little Prince. This adaptation splits the narration and dialogue between the four performers - Jon Foster, Hannah Ringham, Thalissa Teixeira and Zubin Varla - almost arbitrarily, which keeps the audience at an objective distance and brings focus to the text rather than the performances. The design choice to cover the entire performance area in turquoise links the nautical and the dreamlike elements well, and the shades of red worn by the performers makes for a great visual contrast.

Although not the most theatrically compelling or cathartic piece you will ever see, mainly due to a lack of narrative conflict, the idiosyncrasies of this allegory were enough to keep me enthralled throughout. These two distinct halves of the story - one based in reality, the other in fantasy; one slow and steady to make you think, the other chaotic and stimulating to make you feel; essentially our heads versus our hearts - these two halves make a rough whole that takes you via both calm waters and stormy seas on your own voyage of self-discovery.

The Unknown Island is available to watch for free online until June 30th.