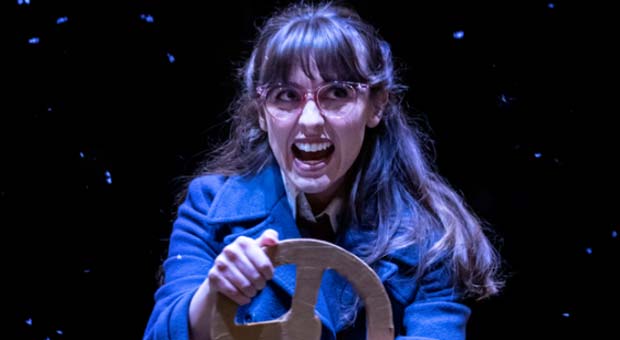 The Strange undoing of Prudencia Hart at Royal Exchange

How we missed our annual festive trip to the Royal Exchange last Christmas, but we’re back to experience the fascinatingly entitled The Strange Undoing of Prudencia Hart. And what a strange evening it is! With a multitude of random moments that eventually collide, it is difficult to say too much without giving away the essence of David Greig’s script.

It’s the winter solstice and lover of old things and traditional ways, Prudencia Hart, fresh from her PhD, is conference bound. In a hot stuffy hall on the borders, she shares her theories on Hell in folk literature. But, as the snow falls thick and fast, the small-town flings off its folk traditions, dumps Robert Burns for a bit of Kylie, and grabs the karaoke mic with both hands. As the night gets increasingly raucous, the snow starts to fall, the vodka shots flow and Prudencia’s world is turned on its head.

More a story with music than a song-filled musical, the cast play, sing and dance through Scottish folk songs and cheesy karaoke, whilst speaking in rhyming couplets. Composer Michael John McCarthy and folk musician Malin Lewis have composed the haunting score, beautifully performed by the cast, and Scottish actor Joanne Thomson is excellent as the exacting academic Prudencia Hart taking on her journey’s challenges. Equally impressive is Paul Tinto as he entwines himself into that journey - he clearly enjoys, and makes the most of, his opportunities in the pacier second half!

The play’s title invites you in to find out more, and the production challenges and confuses. Like a Christmas cracker riddle, it may take a while to work out, it may leave you perplexed, but it will make you smile along the way. This is a Christmas production that certainly breaks the mould of previous years.